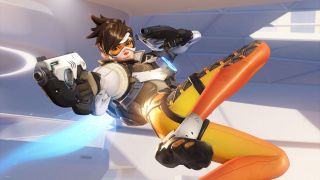 If you've been following the various Overwatch forums and sub-reddits, you've probably already come across a number of complaints about the post-match recap, where players watch a "play of the game" before voting on who best contributed to the game.

It's a broken, unfair system that doesn't give you anything for participating and highlights the wrong players. Or at least, that's what you might think if you approach Overwatch like any other shooter. But Overwatch isn't any other shooter, and there's a subtle brilliance to its seeming unevenness. Of course, to understand why and how the recap system works, we have to go back to when it didn't.

In its early stages, the competitive team game had a scoring system not unlike many other first-person shooters. Unfortunately, this score-based system turned out to be problematic. Game director Jeffrey Kaplan said that not only were he and his team spending an "inordinate" amount of time trying to balance it, but its designs went against everything Overwatch stood for as a team-focused game that relied on players synergizing their abilities and roles.

Too many players went "lone wolf," Kaplan said, trying to rack up kills instead of helping their teammates. Too many people were obsessing over individual stats instead of whether their team won. Something had to change, and the one-size-fits-all score system was axed during closed beta in favor of something that could highlight a player based on their preferred character's strengths.

A healer character was never going to get many - if any - kills, but under the new card system, she could still earn play of the game and show up on the commendations screen. The new system created an "instant change" in player mentality, according to Kaplan.

"Sure, a lot of players complained. 'I like score, I like seeing how much better I am than my teammates.' But even the way they phrased it made us glad that we moved away from the old score system," Kaplan said. "Overwatch to us is a game about winning or losing as a team, and not much else matters within the course of the match in terms of individual performance. What matters is how did you come together."

Kaplan noted that with the new system in place, players began to explore new roles and characters, and were more likely to follow in-game prompts suggesting they change character to fill an underrepresented role. It wasn't just an increase in teamwork that Kaplan and his team noticed in QA testing, though. Players were also happier, even when they lost.

If you can't laugh at yourself...

Kaplan described to me a recent game of his own where he played as McCree, an offense-oriented cowboy hero with a powerful revolver pistol. "My character got play of the game, and at first I was very excited, you know, when you see your name and play of the game, and I'm like, 'Oh this is gonna be so cool, I had so many awesome moments in that match, I can't wait to show off to my friends," Kaplan told me, chuckling.

Once the play of the game clip started however, Kaplan was surprised to see that the game had picked a moment where he not only failed to get a single kill, but threw a flashbang grenade into his own face and missed firing at one of Overwatch's largest characters. And then play of the game ended.

"You might think, 'That sounds broken,' or 'What's wrong with the game, it should've picked a better play,' or 'Didn't that make you feel bad?' But we had this awesome moment where I was laughing, the people on my team were text chatting and voice chatting about how embarrassing that must be for me. Even the other team was laughing even though they had lost the match," Kaplan said.

"It was this cool moment where you know, you might've thought we would be very hostile toward each other. We had just beaten this other team, maybe we should be typing 'REKT' into the chat or whatever people do when they want to be mean. And instead, we were all having a laugh."

Even when players are trying to be mean, there can be an upside. Kaplan said that if a team loses and only one of the post-match cards is of that team's color, it's common for that team to mass-vote for the one character on their side as a sort of revenge against the winning team.

"Some would argue that's a broken moment, that it's not fair, they're not voting for who the best player was in the match, they're voting for their own team, but I would argue there's a strong value in that moment. A team that just lost is rallying around themselves, or one of the players on their team, and celebrating their team. So I actually think there's a lot of value to the card system, even when players approach it with animosity."

Feeling good about yourself is nice and all, but you might be wondering: what do players get out of the card system?

"It's so funny, we've got so many comments about 'what does the voting do,' or 'the voting should unlock XP or items,' and really, the voting is just there to create a social moment where players can agree or disagree that they like the cards they're seeing, and then agree or disagree on what they're voting on," Kaplan said.

In other words, the end of a match isn't, and was never meant to be, about propping up who got the most kills. It's about creating a watercooler moment of "Did you see that crazy play?"

"We recognize that we're trying to have our cake and eat it too, but I think so far, we've done a decent job of that," Kaplan told me. "Can we create a fun environment where people are smiling and laughing and talking to each other and even enjoying a moment where they lost or did bad?"

Fair question. I thought back to how I felt after my various matches, and the voices of the other players crackling through my headset. No one was angry. No one was putting anyone else down.

As for myself, there were plenty of times where I'd wanted to earn play of the game and didn't get it, or thought I would show up on the card screen but didn't. But even then, I would applaud an enemy for a clutch play, or vote for someone else on my team as a means of encouragement. No matter the outcome, win or lose, play of the game or no, tons of votes or none, myself and those playing with me were sharing in a moment, laughing and having fun.