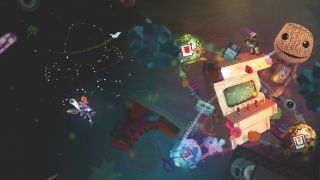 When the original LittleBigPlanet arrived in 2008, it was hard to see how it could be improved. An idiosyncratic collection of wires, switches and pistons, it let gamers create anything – from explodey piles of blocks (beginner level) to a playable version of Tetris (co-creator Mark Healey level). But the sequel blew it out of the water with a tool set that’s still to be bettered.

LittleBigPlanet 2 isn’t just a second go at the same idea. It grew from what its community had shown it could do. The original’s spongy tools consisted of basic buttons, motors and wires, but somehow, it was all used and abused in ways no one ever anticipated. Fully functioning logic was crafted, while the in-game view was hacked to create levels that didn’t even feature protagonist/mascot Sackboy – a recreation of retro 2D shooter Gradius, for example, had a spaceship instead. Media Molecule used it all for the sequel.

LBP2’s tool set makes its predecessor’s look primitive. There’s a circuit board, letting players create circuits with a couple of chips that had previously needed hundreds of switches and pistons. There are easy-to program AI Sackbots, a Controlinator that lets you map DualShock inputs to anything in the game, and so much more. At a raw building level, it raises the bar while making it easier to reach. Things that seemed like pro-level magic in LBP1 can now be accessed by even the most basic skills. Unsurprisingly, creativity has exploded.

LBP2’s accessibility is key. Creating playable games has become as easy as stringing together a few pre-made components. Features such as the Creatinator let you spawn anything – bomb bullets, for example – so throw in a few Sackbots using the preset ‘follow’ behaviour, and you’ve got a shooter in minutes. The Controlinator makes driving games as easy as mapping the D-pad to move a block about, while button-matching dance games or block puzzles are equally as achievable. The reason players have created more than eight million levels? They can.

But while the creative tools have facilitated LittleBigPlanet 2’s success, it’s the social side that‘s really enabled it. LBP2 shipped with the series’ best single-player campaign to date, using those tools to craft a substantial, bouncy platformer, on top of which players soon added tons of extra stuff.

At a time when most games’ online modes consisted of ‘join a lobby’, LBP2 introduced a simple to use but deep community system that gives you access to a literal world of content. Yeah, a lot of it is unfinished, broken and occasionally just plain weird, but a robust set of filters and voting tools means the good stuff rises to the top, and with millions of levels to choose from, you’ve a fair bit to keep you busy. Media Molecule has even hired several star creators and, in 2011, the studio worked with community builders to make a semi-official expansion called Hansel & Gretelbot.

It all adds up to make LittleBigPlanet 2 one of the most unique things on any platform. Save for Minecraft, nothing else on any console has come close to rivalling its creative potential and sheer scale. While its own Sumo Digital-helmed sequel, LittleBigPlanet 3, adds new characters and refines the creative tools, the size of LBP2’s legacy dwarfs PS4’s follow-up. There are few games in the PlayStation’s library that you can argue are a truly unique part of the format’s history, but there hasn’t been anything like Media Molecule’s creation engine. And there probably won’t be for a while. Well, until Dreams.