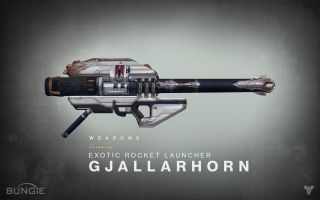 Gjallarhorn is back! If you’re not a Destiny player, that statement probably won’t send a tingle of excitement down your spine, or conjure up a warm memory from your past, and I’m sorry for you. Really I am. However, for a hardened Guardian it’s a big deal; a huge deal, in fact, because the weapon that dominated and in many ways defined Year One of Destiny is returning with the Rise of Iron expansion. But why now? How has it changed? And - most importantly - will it capture the same emotions as it did when players finally unlocked it the first time?

In case you’ve been living in a (loot) cave for the past couple of years, or you’re someone who joined Destiny in Year Two, here’s what a Gjallarhorn is: an Exotic Rocket launcher with ALL the best perks. Tracking means you can’t escape it, Quick Draw means you can’t predict it, and Wolfpack Rounds (which split missiles into cluster bombs upon impact) means that you really, really can’t escape it. The weapon is perfectly suited to both Crucible and PvE - it can lay down massive damage on bosses in Raids, and control crowds in Prison of Elders. It’s the uber-weapon. Or at least it was, back in 2014/15.

“Gjallarhorn was without question overpowered in Year One,” explains Weston Albert, who operates the essential BungieInformer on Twitter. “Bungie even admitted that it was a result of balancing the weapon before all the assets were in the game, and there was little feedback to the player about how effective it was being. So they kept ramping up the power to make it feel good, which eventually led to its final OP state.”

There was definitely a mythos around the weapon - and the game was divided between those who did and didn’t have Gjallarhorn. Exotic merchant Xur actually sold Gjallarhorn during his first visit, but most didn’t appreciate the weapon’s power, understand what Xur was, or simply didn’t have enough Strange Coins to buy it. And it didn’t return to Xur’s travelling shop of delights until a couple of weeks before The Taken King launched, after which it was locked at 170 Light and essentially confined to use in regular Crucible.

“It became the great White Whale for anyone who didn't have it,” says Albert. “Raid groups on LFG sites practically wouldn't let you into their group if you didn't have one. People wanted it badly and being at the mercy of RNG just made it that much desirable.” For me, I unlocked Gjallarhorn from a random Exotic Engram, a couple of months into play. At the time, I didn’t really know what I’d got, so I locked it away in my Vault while I concentrated on unlocking some Exotic Primary weapons. Back then, everyone was still trying to figure out the depth of Destiny’s systems, including Bungie itself, so there was a lot of conflicting opinions on what constituted ‘good’ or ‘trash’ in the game.

It was only when I heard friends talking excitedly about this amazing Exotic rocket launcher with a name no-one could either pronounce or spell that I realised I already had the beast unlocked. I delved back into the vault and suddenly produced it, ready to grind to full power, much to the annoyance of many who were yet to get a sniff of Gjally. And that’s exactly the point - Gjallarhorn was a big, beautiful, totally unbalanced weapon at a time when Destiny was a big, beautiful, unbalanced game. The OP launcher with the wolf motifs was a symbol for the struggles and aspirations of a fledgling game. Even the way it was acquired - through RNG (random number generator - or as some have dubbed it 'random new gun') - perfectly mirrored the how players could have totally contrasting experiences of Destiny, based on little more than luck and interpretation.

“Not only do I remember my first Gjallarhorn drop vividly I also have the image of it being awarded saved away. It was an incredibly special moment as it coincided with my first completion of the Vault of Glass,” says Mark Chamberlain, aka WoolyMammoth, who has sunk more than 1000 hours into the game. Despite repeated attempts to unlock the weapon from random Exotic Engram drops, Mark waited months to get hold of Gjallarhorn, whereas his friend unlocked it after just a handful of Nightfall Strikes. “One friend of mine started playing Destiny five months after launch and managed to get one from his third Nightfall Strike and, although his reaction wasn’t your typical YouTube fodder, there was certainly a lot of maniacal laughing; my friends and I were routinely, jokingly told about how it was ‘well deserved’ and how he’d be ‘carrying us’ for the foreseeable future.”

The scarcity of the weapon, coupled with the completely random nature of its acquisition is what made Gjally so desirable. Well, that and the over-powered nature of the beast. However, Rise of Iron is bringing the weapon back for everyone to enjoy (you actually reforge it during a set of story missions), and it has been balanced too. So… how does Bungie recapture the excitement of actually getting it? And why bring it back at all - surely it’d be better to have Gjallarhorn live in infamy as a legend within the game itself.

“We had the idea for Rise of Iron first,” explains Scott Taylor, executive producer at Bungie. “Then we were thinking about what we could bring back and what could be completely new… and there was no grand plan for Gjallarhorn to return, but this felt like an opportunity to do that. When the Taken King came out we had a bunch of new stuff, and we wanted to try and introduce that for players to have new stories and new adventures. And by doing that, you then create opportunities like this - we rested it for a while, and found a time that felt right and impactful to bring the weapon back. It makes more of a difference than if you just keep all the weapons the same year on year.”

The new Gjallarhorn has much to live up to, and I personally fear players will be slightly underwhelmed by the weapon once it has been stacked next to Sleeper Simulant, Zen Meteor, and other Exotics that have been buffed and polished to fit the latest version of the game. It’s tough to appreciate until you step back and take it all in, but Destiny has changed massively in the two years it has been available, with levelling systems, loadouts, enemy types, and modifiers all having a huge impact of how it’s played. And let’s not forget the impact of the community, which has found new and creative ways to gain an edge or bend a rule. All this could mean that Gjally feels more like a curiosity; a relic from the past, rather than a must-have Exotic for that single slot on your loadout.

Taylor, however, acknowledges that there is a significant expectation around the rebirth of Gjallarhorn, and Bungie has been working hard to give it a suitable reintroduction. “One of the things that we’re always trying to do is align the experience of the game with the people on the couch. So, there are a lot of fun things outside the game that the Gjallarhorn brings - there’s a real emotion to it, especially in the acquiring or not acquiring of it. And we find that kind of emotion really interesting to play with. When people come to play Rise of Iron we really want to honour that emotion by having a really amazing quest where people go on and reforge their own Gjallarhorn. It’s really fun content, but also really challenging, so we feel it honours the emotions people felt first time around.”

There’s a difference between ‘challenge’ and ‘random’, and that’s crucial when it comes to creating scarcity and desire for a ‘thing’. Gjallarhorn certainly won’t be as rare as it first was, but in many ways that reflects the democratisation of the game. In the same way Year One Gjally mirrored the uncertain yet exciting nature of slightly unbalanced Year One Destiny, so this reforged weapon is a perfect symbol of a game that rewards players more evenly, and creates an environment where skill can trump superior gear. Well, most of the time. Not only that, this new Gjallarhorn will be a prestige item for players who scrapped so hard to unlock it in the first year - a reminder of their first year with Destiny, and the memories that brings. Close, caring communities have sprung up around the game, and for many it’s a habit or way of life rather than just a simple evening amusement. And in the first year, Gjallarhorn was the big talking point that drew so many people together.

It even united the team at Bungie when it was first being created. I speak to Taylor briefly about the process of creating such a special weapon. “I just remember when the first concepts came out… we were sending emails around saying “Oh my God, look at the wolves on this thing”, and people were getting really excited,” he explains. Speaking to Bungie’s own blog, Art Lead Tom Doyle goes into more detail: “The initial block model for Gjallarhorn was cool looking, but it was missing some detail that would make it shine in first person view. So, Mark (Van Haitsma - who created the 3D model)  just kept adding a wolf every day that he was working on the high resolution model.” Doyle jokes that Gjallarhorn has the highest WPG of any Destiny weapon (that’s Wolves Per Gun), before adding “I thought this concept said a lot about the world we are making, mainly the mythic elements of its fiction.”

It’s true. Few weapons in Destiny get their own questlines, and fewer still have such a rich and intriguing backstory. “There's some really cool lore about it - being formed from the armour of fallen Guardians at the battle of Twilight Gap,” says BungieInformer’s Albert. “And carrying around a golden rocket launcher emblazoned with wolves is just straight up awesome. It's like something the White Ranger from Power Rangers would have had.”

So will Gjallarhorn retain its cool, powerful mystique weeks or months after the launch of Rise of Iron? Who knows - Bungie is getting damn good at understanding Destiny, and the needs of its community, so it’d be safe to assume new Gjally is a fun weapon to unlock and use. It’s doubtful, however, that it’ll ever truly recapture the domination and demand it commanded in those early months. For me, though, that’s no bad thing. I have my memories of Year One Gjallarhorn, but since then I’ve forged fresh love-affairs with Destiny, like the labyrinthine journey to unlock Sleeper Simulant, and I’m ready to chase fresh loot. Having said all that… the tingle of excitement remains, as I contemplate the reforging and refiring of the greatest weapon this game has ever seen.

Destiny: Rise of Iron is released for PS4 and Xbox One on September 20.