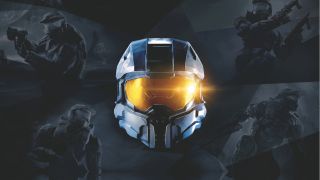 Famously, Halo: Combat Evolved – the game that changed the landscape of first-person shooters on console forever – began life neither as a first-person shooter, nor on console. I do not consider this a coincidence. But before we get into that, a brief history lesson. The world’s first glimpse of what would eventually evolve to become the Halo we know and love occurred in 1999, a year before Microsoft’s first Xbox console was even formally announced.

Revisiting the grainy VHS footage of its unveiling, it’s surprising just how many of the Haloverse’s iconic sights were established this early on in the life cycle. The trailer opens with a glimpse of the Master Chief’s big orange mug. UNSC soldiers cram themselves into a Warthog’s every last nook and cranny like clowns in a comedy car. As the trailer sweeps the other side of battlefield, we catch our first sighting of Elite soldiers brandishing Energy Swords. Classic, familiar scenes that are burned into our memories forever, and play out to the tune of something even more recognisable: Halo’s booming orchestral score, practically unchanged note for note from the version we still hum today.

But for all the cosmetic similarities, under the skin the Halo of ‘99 was a quite different beast to what it would ultimately become. In this stage of its life it was a third-person action game with real-time strategy elements, and one that was intended to see release not on a console, but Windows PC and the Apple Mac computer. (Which at this point in history, remember, was about as fashionable as a Christmas sweater, and not nearly as ironic).

I won’t dwell too long on what happened next as it’s all ancient history now. But to summarise, Microsoft swept in to purchase the Bungie studio from under Apple’s nose (much to the ire of Steve Jobs), and under MS’s orders the project was whisked away from Mac/PC in order to be re-tooled into something capable of making an impact at the Xbox’s launch. Somewhere during that process, presumably to make it punchier for the console crowd, the decision was made to transform Halo into a first-person shooter.

That was a ballsy move, because the popular school of thought at the time was that the first-person shooter genre was a poor fit for consoles, whose bulky controllers couldn’t hope to match the immediacy of mouse and keyboard interfaces. Oh, they existed on consoles in the years BC (Before Chief), all right, and a great many of them are considered classics, such as GoldenEye, Perfect Dark and TimeSplitters. But returning to these games today requires some serious mental rewiring before you are able to successfully look past their awkward, oblique control systems and often baffling level design.

But there’s something ageless about Halo: Combat Evolved, like Jennifer Aniston, or that McDonalds Happy Meal that’s been sitting in someone’s cupboard for the last six years. Even today, nearly 15 years after its initial release, you can fire it up and it feels thoroughly slick and polished, with all the modern conventions and conveniences we’ve come to expect from today’s first-person shooter titles.

You’d never guess that this was a title from 2001, and that goes doubly so if you’re playing the 2011 Anniversary remaster, with its fancy HD visuals feeling more in sync with the flow of the action than the prehistoric original graphics. In a neat trick, you can swap between the two skins instantly by tapping the back button. Aside from some repetitive room design late in the game and some dodgy signposting (which is crudely but effectively fixed in the remaster by plastering arrows all over the floor), this function is your only true hint at the game’s age.

Halo was less an evolutionary step in FPS design as it was an evolutionary elevator to the penthouse suite. How games generally tend to evolve is that a new title comes along with a new idea (for example, BioShock’s audio logs, Call of Duty’s perks, Assassin’s Creed’s mantling system), the entire world takes note, and before you know it, every other title that comes along afterwards pinches the idea and incorporates it into their own design. That is to say, gamemakers and fans alike tend to have preconceptions about how the various genres should work, and they persist until a better idea muscles them out. But don’t feel bad, guys – pretty much everything else, from science to engineering, works along the same lines, too.

But in all my years I’ve never seen anything shake a genre up until it fizzes quite like Halo: Combat Evolved. Almost every modern first-person shooter feature first laid down roots here, and that’s something I think can be attributed to its unusual development path. Since it didn’t become a first-person game until quite late on in its development, Bungie didn’t begin the project with any preconceptions about what an FPS could or could not be on a console. They built the world and the enemies and the weapons first, and then were forced to reverse-engineer it to work on Xbox. This led to some fresh approaches and some creative problem-solving, and the results continue to echo around the Xbox scene today.

I’m not sure how much credit Bungie can take for the control system – hindsight is 20/20 and all that – but it seems pretty intuitive to me to use a dual-analogue stick set-up for separate movement and aiming, and I’m sure it would have become standard soon enough anyway. (Although I’ll forever be a fan of the way it seamlessly introduces the control system within the game’s fiction: it’s dressed up as a calibration test for your suit’s systems, and even finds the time to ask if you want to invert the controls). Other concessions to the game’s new console home, however, are genius, and changed the course of our hobby forever.

Perhaps the most influential is its strict weapon limit. Before Halo, it was fairly standard to have your entire fleet of guns at your disposal. Yet Halo limits you to just two guns at any one time, and if you want to change it up you have to source a replacement from the battleground. Likely, this was a solution to the fact that the Xbox controller doesn’t have a row of function keys to hand; in practice it wedges in a whole new layer of strategy into the proceedings. Now, every selection is an agonising choice; do you carry two complementary weapons – maybe a sniper rifle and a shotgun – or do you double-down on short-range firepower? Should you keep a powerful cannon with two shells remaining, or ditch it for something much more modest, but with bundles of ammunition?

Your decisions are compounded by the wonderful balance between the available arsenal and the foes you face – even the bluntest of tools can prove capable of cutting through some tough obstacles. For example, the plasma pistol, seemingly the weediest weapon in the game, can effortlessly disable shields that deflect shotgun pellets like rain off an umbrella. There was no room for passengers here; every weapon had to justify its existence.

The two-weapon shtick proved such an elegant fix that it’s now widely adopted across the genre, from blockbusters such as Call of Duty on downwards. Another Call of Duty feature that first saw the light of day in Combat Evolved was regenerating health. Was this a response to the loss of the PC’s ‘quicksave’ feature? Halo apes this function by saving your progress at regular intervals, but without health regen, it would have run the risk of snookering the player by saving their process with but a slither of health remaining.

Like the gun limit, the energy shield is a small, functional change which has huge ramifications for the flow of the action. It implores you to scout around you in the middle of firefights, looking for small pockets of cover which you can retreat to and regroup if things get hairy. On higher difficulty settings, it becomes a game of chicken, as you poke your head above the parapet and test your shields’ limits to breaking point before diving back behind cover. It led to the rise of a smarter, more aggressive breed of gunplay and it’s little surprise that few games have seen fit to return to the health pack scavenger hunts of old.

Halo’s roots as a third-person strategy game also inadvertently dragged the FPS genre kicking and screaming into the outside world. In the years BC, when series such as Doom and Quake were the standard-bearers, the trend was to set levels in tight, claustrophobic corridors. Halo: Combat Evolved blew the walls wide open, with huge expansion levels such as The Silent Cartographer, offering the kind of freeform, tactical warfare that fans could only have dreamed about at the time. I would argue that Bungie never bettered the first half of the very first Halo; tellingly, the quality takes a nosedive in the second half when the action shifts from the outdoors to cramped alien ship interiors, and the guile of the Covenant forces gives way to the brutish numbers game of the Flood. As Combat Evolved thunders on, it seems to channel Doom and Quake more and more and is all the weaker for it.

All of which is to speak nothing of the part the Halo series played in popularising online multiplayer on console. In its original incarnation, of course, Halo: Combat Evolved couldn’t be played online at all – it pre-dated the Xbox Live service, which didn’t come along until a year later, in November 2002. Yet Combat Evolved played a vital part in whetting appetites for the service by opening up its multiplayer to local area networks – you could glue up to 16 Xboxes together with cable wire for a thrilling taste of things to come.

Halo: Combat Evolved was responsible for pioneering almost everything we know and cherish about first-person shooters today. From the clever integration of vehicles and turrets to the use of save points, to recharging shields and the finely tuned weapon set, it all began life here. And the only reason it even came about in the first place was because Bungie were forced to swap genres halfway through and scramble to make things that were thought unworkable work. It makes me wonder if it’s possible to repeat the trick to breathe new life into other stagnant genres. Hey, Activision, if you’re reading this, is it too late to turn Destiny 2 into an arcade racer? That’s a genre that feels like it could use a fresh pair of eyes...