Gunning down, knifing, and battering mobsters you have no personal truck with is Hotline Miami’s central, bloody hook. Yet despite scoring a full house in indignant headline bingo – casual slaughter, blood, the gamification of human suffering – Hotline Miami escaped the shouty tabloid wrath that enveloped the likes of Grand Theft Auto and Manhunt.

We’d like to think that’s because this is a game that refuses to sugar-coat the killing, making you feel increasingly uncomfortable, and causing you to question why you’re being told to snuff out Russian gangsters. An essay on the causes and effects of desensitisation to violence in video games, if you like. But it’s probably because it looks like it was made in 1989 and is really bloody hard to play. 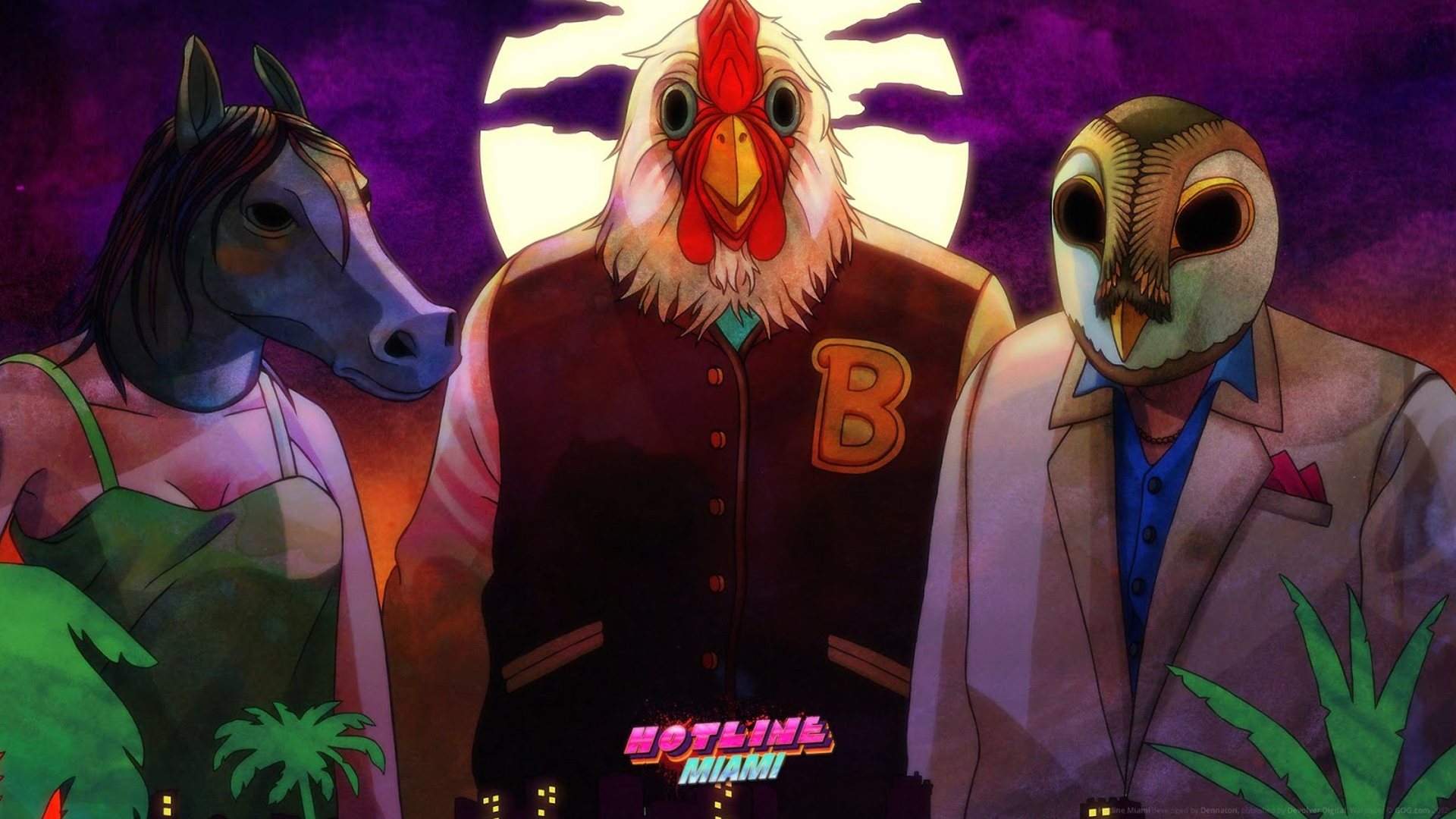 As the anonymous anti-hero, nicknamed ‘Jacket’ by players, you take delivery of a mysterious package containing a frankly terrifying rooster mask and a note instructing you to retrieve a briefcase from a group of criminals. So off you go to wipe out said criminals. And so it goes every time you receive a creepy answerphone message delivering your next set of seemingly innocuous orders to deal with a “problem” or make sure guests “have a great time”.

You’re never told why, only that “failure is not an option”. Except that it frequently is, on account of Hotline Miami being – did we say this already? – bloody hard. A single bullet is all it takes to eliminate an enemy, and the same is true of you, which shunts you back to the start of the level.

So you find yourself restarting levels a lot: at first by mistake, and then later by design. Because underneath the blood and the stylised top-down veneer is a deft AI weave. Every time you begin a mission the enemies you face will behave slightly differently. Some will come looking for you if they hear gunfire, others will ignore it and stick rigidly to their patrol patterns until you run into them.

This is Hotline Miami’s cleverest surprise. It’s not a shooter. It’s a puzzle game. Every level is a series of rooms with a variety of routes through them, some leading to better end-of-level grades than others. Every time you play, your route will be slightly different. First enemy carrying a shotgun? Die, restart, repeat until he’s armed only with a baseball bat.

Designer Dennis Wedin, one half of Dennaton Games, confirmed as much in sister magazine Edge shortly after the game came out. “If enemies reacted to the gunshots and bodies, they would destroy the puzzles in the room,” Wedin said. “All the rooms are designed so that there are a few ways to enter the room and solve the puzzle. But if you just started shooting outside the room and they all came running out, you’d just destroy that.”

In other words, the AI is designed to be just as freaky as the storyline. Adding to the sense that this is what Stardew Valley would look like as a snuff movie, each level has a letter hidden within it. These form a password which can be used in a bonus level to discover more about who is making these phone calls.

Hotline Miami arrived on PlayStation 3 and PlayStation Vita just after E3 2013, where indie games were given centre stage at the unveiling of PlayStation 4. The best example of this new focus on creativity was arguably Hotline Miami on PS Vita, where touchscreen lock-ons and map scrolling added a new dimension to the game. Sadly Sony’s handheld no longer sees so many revolutionary new releases, but Hotline Miami remains just as vital (and violent) four years on.

The best TV for PS5 and Xbox Series X: get the best experience on next gen consoles

Best Kindle 2020: Which Amazon ereader should you buy on Black Friday