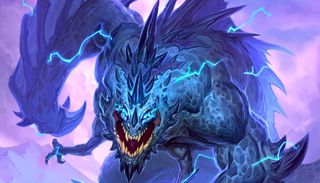 In record time, today Blizzard announced some much-needed nerfs to the most broken deck in Hearthstone history: Galakrond Shaman. The Descent of Dragons expansion is barely a week old yet we're already seeing changes, which just goes to show how absurdly overpowered Shaman really was.

Three Shaman cards are getting hit with the nerf bat on Thursday, December 16, as well as an infamous neutral card which is - coincidentally - great in Shaman. Those are:

These nerfs are definitely needed, but I have to wonder if they'll have the desired effect. Today's update doesn't touch the amount of Rush minions that Shaman has access to thanks to Galakrond's Invoke, nor does it directly affect Dragon's Pack, better known as the five-mana 10/12 Taunt. And even with Corrupt Elementalist at six, Shaman can still play a fully Invoked Galakrond on seven, then follow it up with Shudderwock.

This is to say nothing of the other obscenely broken deck which is starting to make waves in the meta: Deathrattle Rogue. This deck lives and dies by Necrium Apothecary, an unassuming minion which can instantly win games if played on turns four or five. Thanks to obscenely busted cards like Dragon's Pack and Necrium Apothecary, the Descent of Dragons meta has deteriorated to mostly Deathrattle Rogue, Galakrond Shaman, and various aggro decks trying to counter said Rogues and Shamans, and I have to wonder if these nerfs will change that.

The good news is that even if the ladder meta is still horrendous after today's update, Battlegrounds ought to be better than ever. It's getting some big balance changes of its own, the biggest being the removal of Nightmare Amalgam, everybody's favorite buff target. This ought to make the Battlegrounds minion tribes feel more distinct and give other cards a chance to shine. Amalgam's not the only one getting the axe, either; the Brann Bronzebeard and Bartendotron heroes have also been removed for the time being.

Here are the rest of the Battlegrounds changes in tomorrow's update:

If nothing else, these balance changes definitely feel like a step in the right direction. That said, I fear we'll need at least one more batch of changes before Descent of Dragons really clicks, and at this rate it likely won't arrive until next year. It's been a great expansion apart from a few balance outliers, so here's hoping Blizzard can strike that balance soon - before everyone burns out.