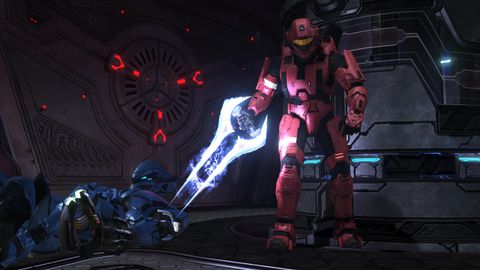 ODST is all about mindset.

Are you hoping for more Halo 3? Are you looking forward to another adventure in that game’s grandly exaggerated yet comfortingly familiar universe? Are you excited to wield the same crazy weapons and vehicles in brand new battles, to encounter the same smart enemies in unexpected new situations and to witness the same epic war from an entirely new perspective? Are more missions and more multiplayer enough? If so, then ODST is the answer. You will definitely not be disappointed.

But what if you got carried away by the hype? What if that amazing live-action trailer, or that significant September release date, have you convinced that ODST is the next major milestone in the Halo phenomenon? What if the talk about detective characters, film noir settings and gritty close-quarters combat have you anticipating a bold departure from the Bungie formula? Then yeah, you might be in for a bit of a letdown. Like we said at the start, though, all you need is the right mindset. So here’s what you should expect from Halo 3: ODST…

For pure escapism, Master Chief is the perfect hero. He stands seven feet tall, he wears nearly invulnerable armor, he hangs out with naked computer chicks and, best of all, he’s a blank slate on which players can project themselves. For narrative impact and emotional resonance, however, he sucks… no one can really relate to, or truly empathize with, a faceless genetic supermachine.

His controversial absence in ODST, therefore, is actually a big plus. Halo’s developers have finally been freed to create new heroes, and this time, they’ve written them to be much more realistic, much more believable and much more human. “Orbital Drop Shock Trooper” may sound like a fancy title, and does indicate special training, but these men are still simple soldiers with a limited knowledge of the overall conflict. They follow orders, even if they don’t agree with them. They bicker. They crack jokes. They compare war stories and watch each other’s backs. They make lewd comments about the opposite sex, or reveal long-simmering romances. In other words, they have real personalities.

Above: Look ma, no masks!

The game’s story is structured differently, too, enabling these characters’ differences to shine. When an ODST mission to Earth goes disastrously wrong, the squad is scattered across the futuristic city of New Mombasa, Africa – visited briefly in Halo 2 – and the team’s rookie member is forced to wander the urban landscape at night, piecing together what happened during the six hours he was unconscious in his drop pod.

Sadly, the Rookie is as silent and empty a vessel as Master Chief. Each time he discovers a clue to his friends’ location, though, you’ll jump into their unique and colorful shoes for a flashback mission. One is a trigger-happy explosives expert who gets his hands on a tank. One is the gruff and grumbly cowboy type who must protect a critical government facility. One’s got a cocky attitude, but the sniper skills to match. One’s the leader (voiced by Firefly’s Nathan Fillion), trying desperately to rescue his female superior (voiced by Battlestar Galactica’s Tricia Helfer) and discover her secret reasons for sending them on this failed operation to begin with.

Compared to the sweeping galactic saga that is the original Halo trilogy, ODST’s plot is decidedly small-scale. Intimate. You won’t experience any earth-shattering revelations, or be blown away by too many breathtaking setpieces. You certainly won’t feel like you’re saving the universe. Some players will undoubtedly be bored, but after eight years of increasingly convoluted story threads that often required the help of novelizations and comic books to unravel, we felt refreshed.