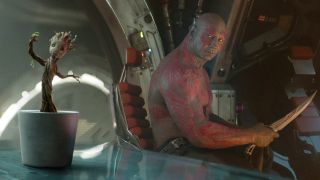 If you're a fan of the Marvel Cinematic Universe - or just films in general - then one person who is definitely worth following on social media is James Gunn.

The Guardians of the Galaxy Vol. 2 director is more communicative than most when it comes to responding to his followers' constant questions, and his latest Facebook post answers a ton of fan queries in hilarious fashion. The most interesting bit of new info? Groot will not have any memory of his past.

There's plenty of interesting hints at what Gunn has in store for the Guardians sequel in the Facebook post, not least of which is what tracks might be on Awesome Mix Vol. 2: "Two songs played in the San Diego Comic-Con footage: Fleetwood Mac's The Chain and Jay and the Americans' Come a Little Bit Closer. Does that mean they're in the movie? Maybe". Gunn also deftly dodged a question about whether Groot would stay a baby for the duration of Vol. 2, which has me thinking that he'll be getting bigger and bigger over the course of the film.

All in all it's a fun, informative post without being too revealing (something Gunn has become very good at). Here's hoping fans take notice and switch up their questions a little more going forward.