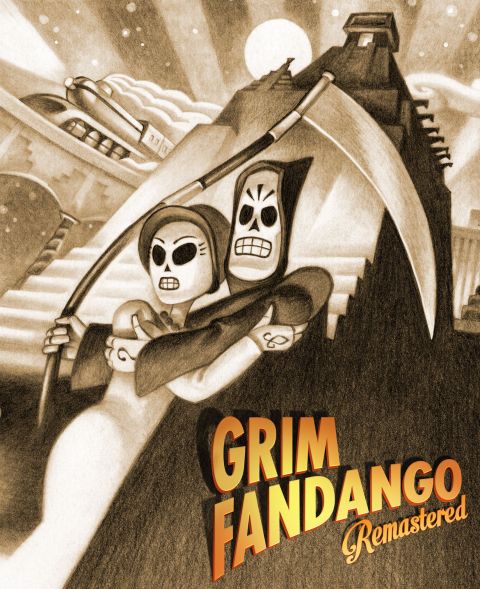 With a fantastic story (and some awkward controls and puzzles), Grim Fandango Remastered is still the same great game you remember from 1998. Those bugs, though? Those are all new.

I don't get many chances to bust out the phrase mise-en-scene in a video game review without sounding like a pretentious asshole, so I'm going to take the opportunity here. It's a French term used in film to encompass the art of environmental storytelling - and it's something Grim Fandango absolutely nailed in 1998. Now, 17 years later, Grim Fandango Remastered brings the brilliant Mexican-underworld-meets-film-noir classic adventure to modern machines with a host of welcome new features. It also brings with it a few new problems of its own.

Grim Fandango follows the exploits of Manuel Calavera, a travel agent who helps the recently deceased find passage from the Eighth Underworld to the great beyond. When one of his saintly clients doesn't qualify for the express train ticket she rightly deserves, he sets out to uncover the corruption lurking beneath the surface of the underworld while bringing his client to her final resting place. It's Raymond Chandler by way of the Land of the Dead, yet made all its own with all the wit and hilarity that defines classic LucasArts adventure games.

What makes Grim Fandango stand out is how it deals with the passing of time. The journey to the end of the underworld takes four whole years, and during that time we see characters grow and friendships evolve in the kinds of ways that most games gloss over. Grim Fandango is a long game (I've played it before and it took me 12 hours to beat it this time around), but everything feels like it has a purpose, even if that purpose is merely to flesh out the incredible atmosphere. With top-notch voice acting and a spectacular swing-era jazz-infused soundtrack, the Eighth Underworld feels like a real, lived in place - even if its inhabitants are all dead.

For all of its success in telling a narrative that's equal parts hilarious and somber, Grim Fandango Remastered is - for better and for worse - the same game as it was over a decade ago. Yes, that same charm and cleverness is still just as effective, but the puzzles themselves feel like a relic of the past. 'Adventure game logic' is in full effect here, meaning you'll have to scour every last pixel to snag everything that isn't nailed down. Then, you'll use said objects on whatever (and whomever) you can find to move the game forward. The leaps of logic here aren't as bad as other adventure games, but there are moments where I wondered how anyone ever found out how to get new shocks for Manny's sweet ride without consulting a FAQ.

As for the aging graphics, well… the pre-rendered 3D environments certainly aren't doing anyone favors. The character models and lighting are touched up, but these static backgrounds appear to be just as low-res and grainy as they were back in the '90s, and nothing has been done to highlight critical item pick-ups or pathways. While the pre-rendered backdrops allow for some truly breathtaking camera angles (that one with the blimp still impresses the hell out of me - you'll know it when you see it), it means you're more likely to get stuck because you literally can't find the next place to go. Higher-resolution backgrounds would've gone a long way to making the world more vibrant and easier to navigate.

The Remastered edition also includes a fancy commentary track that you can activate in specific areas with a quick tap of a button (as long as you enable it in the options menu). These brief snippets feature director Tim Schafer, composer Pete McConnell, and a bunch of artists and programmers chatting about different aspects of Grim Fandango's development. Hearing them wax nostalgic about inspirations taken from films like The Big Sleep or the troubles with writing proper door code are fascinating to anyone who loves Grim Fandango, or simply wants to learn more about the design process. I only wish Double Fine included the Remastered making-of documentary videos (which are freely available on YouTube) to complete the package.

Despite the seeming lack of actual, y'know, remastering done to this remastered edition, the new features Double Fine added are certainly welcome. In addition to the tank controls from the original release (where you rotate and walk in the same manner as the first few Resident Evils), you also get a more conventional directional input on controllers, as well as point-and-click input on PC and touch input on Vita. I found myself opting for the modern controller input, and tapping the Vita screen whenever Manny obstinately decided he didn't want to look at the important thing he needed to progress. While maneuvering around the underworld never feels completely natural, having a variety of options at your fingertips certainly helps.

Unfortunately, the added control options are the only modern concessions made to bring Grim Fandango to a new generation of players. Like the original release, there's no user interface to speak of. This makes Grim Fandango feel much more cinematic, but the lack of any on-screen prompts or tutorial will confuse the crap out of new players as they try to figure out how to make Manny interact with the world. There's no hint guide (a feature available in both Monkey Island remasters), so if you get stuck, it's off to the internet with you. The widescreen option awkwardly stretches everything to fill the screen, meaning that the original 4:3 aspect ratio is really the only way to play properly. And there's no auto-saving whatsoever, meaning if you don't take time to save your game often, you could find yourself reeling from a show-stopping bug.

And boy, are there bugs. Sound effects frequently cut in and out, weird lighting issues cause certain objects to blink incessantly, and cutscene transitions can be especially jarring. One time I clipped through a door and couldn't get back out; another time, I gave an item to someone who then began to spin around in place for the rest of eternity. Each one required me to reboot my game - and without auto-saves in a time when most people have come to expect them, many bugs can potentially set you back several hours.There were many times where I felt like Grim Fandango's code was hanging together by a tenuous, skeletal thread.

It's a shame, because Grim Fandango is an otherwise fantastic experience. It's a prime example of how video game stories aren't totally bullshit; how they can be filled with layers of nuance and actual character development. And it's a reminder that once upon a time, LucasArts was the king of style. Despite its age (and its slew of technical issues), Grim Fandango Remastered is still a journey worth taking - but as someone who absolutely adores the original, I can't help but feel that it deserves better.

This game was reviewed on PS Vita, and playtested on PC.

With a fantastic story (and some awkward controls and puzzles), Grim Fandango Remastered is still the same great game you remember from 1998. Those bugs, though? Those are all new.