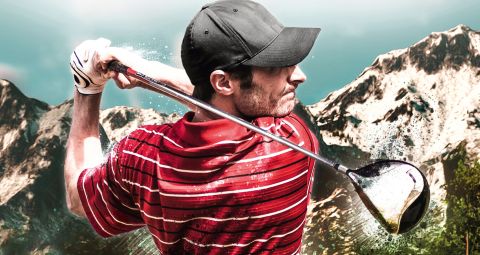 It may simulate golf to a punishing tee and have a course designer-sized trump card, but until it raises its game elsewhere the PGA Tour series is still the king of the fairway.

The Golf Club, if you missed it the first time round back in 2014, strips out all the bells and whistles that have feature crept their way into the official PGA series and attempts to dial things back to the good old days when this was all fields and golf games were all about nailing the perfect handicap. As an unlicenced title, it doesn’t have any real professional golfers (although former pro Greg Norman has slapped his endorsement solely on the Course Designer mode) or official courses to stick on its box, but it goes some way to remedying this uncomfortable void with a robust yet daunting set of swing and shot physics and a unique design suite that can procedurally generate courses in a flash.

These two elements are the centrepiece of the spartan TGC experience (and I really mean spartan, but more on that later). Sure, the courses you mosey around in both pre-designed and user created varieties aren’t the likes of Royal Troon or Pine Valley, but the physics at your disposal enable you to slice a screamer from tee to hole with the minimum of fuss. The lack of on-screen gauges and hub furniture that have become the norm elsewhere might rankle some, but it’s clear the dev wants you to rely more on your own intuition and the game is better for it.

If you decide to play a course at the easiest setting the usual colourful trail behind your ball and distance-gauging lines will be reinstated, but you’ll soon feel like you’re cheating rather than watching the swing of your golfer to gauge that all important sweet spot. However, the choice to map your swing to the right analog stick is as baffling as it was last year and feels counter-intuitive if you’re in any way used to the left stick/three-button-press systems of its forebears.

It’s admirable that HB Studios and Maximum Games have tried to create a no frills golf simulator, but the sheer lack of supplementary modes and in-match content robs the game of the immersion it so desperately needs. There are no crowds, no extra camera shots to add a professional realism and the commentary is limited to a single voiceover that becomes more of an annoying caddy than the pro VO work of PGA Tour’s Rich Lerner and Frank Nobilo.

Another cute little quirk of the Course Designer is the ability to jump in and play a hole or entire course seconds after making tweaks to its structural design. It’s the perfect way to sample your efforts hands-on. Is that green flat and forgiving? Better add a slight yet cheeky gradient that’ll punish players for landing the ball too close to the flag. It’s made for some ludicrously tough courses online, but it’s also led to some absolute gems from the community.

There is a new career-esque Seasons mode featuring five different competitions, but it’s a essentially a series of increasingly challenging tournaments. With the only real reward relating to in-game trophies, and no XP system or means of improving your golfer, this conservative approach makes long-term play a sisyphean task for anyone other than hardcore purists. Save for the compelling Course Designer there are no other modes to speak of, not even a silly crazy golf mini-game (such as The Nightclub mode in the recently released Rory McIlroy’s PGA Tour). If the game was a gorgeous recreation of the sport in both mechanics and visual fidelity, part of me could forgive this, but TGC ends up offering a package tailored for a very niche set of gaming golfers.

On the subject of Mr McIlroy, The Golf Club: Collector’s Edition is always going to be compared to the latest entry in the series that’s dominated the genre for the better part of a decade. In terms of visual oomph, PGA Tour is a far more palatable experience with lawns that flatten with the impacts of swings and environments that shimmer thanks to the power of the Frostbite 3 engine. By comparison, TGC is a mixed bag - the background environments are detailed and vibrant but the foreground objects look so basic it throws you right out the moment.

Both games suffer from an annoying amount of pop-in (although I encountered far fewer examples in my considerable time with PGA Tour). Send your ball flying down the course in TGC and it becomes *ahem* par for the course to see the environments gradually blip into existence right before your eyes. Mode wise, PGA Tour has had a number of its features stripped out for its current-gen debut but the excellent career mode remains in all its glory - as does the aforementioned Nightclub feature.

One thing ol’ Rory doesn’t have is a creation suite and it’s the trump card that saves The Golf Club from sports sim mediocrity. The course designer (endorsed by former Australian world number one and real-life course creator Greg Norman, don’t you know) enables you to procedurally generate an entire 18-hole course in seconds based on a few key choices. The Collector’s Edition adds three new seasonal themes to the mix (Delta, Highlands and Tropical) - however, considering the tweakable weather effects are the same for any terrain, these new extras don’t exactly justify the £35/$40 price tag.

You can tweak everything from the number of holes to the gradients of hills, the creation in question morphing in the background in real-time. It’s a genuinely unique and intuitive feature, marred only by a frustrating lag in seeing those tweaks appear on your course. You can share your creations just as easily, and considering the hundreds of user created incarnations available to try out there’s clearly an audience out there for this malarky.

The strength of TGC’s physics and its engaging Course Designer are shining diamonds in the rough, but the rest of game (or lack thereof) proves the dev should be less concerned with wasting money on a pointless reissue and focus its attentions on building a franchise that has the potential to give EA a run for its big boy money. Until that day, The Golf Club: Collector’s Edition remains an optional curio for golfing purists in need of a PGA Tour getaway.

It may simulate golf to a punishing tee and have a course designer-sized trump card, but until it raises its game elsewhere the PGA Tour series is still the king of the fairway.

Dom Reseigh-Lincoln
Dom has been playing games longer than he'd like to admit, but that hasn't stopped him amassing a small ego's worth of knowledge on all things Tekken, Yakuza and Assassin's Creed.
See comments
Gaming deals, prizes and latest news