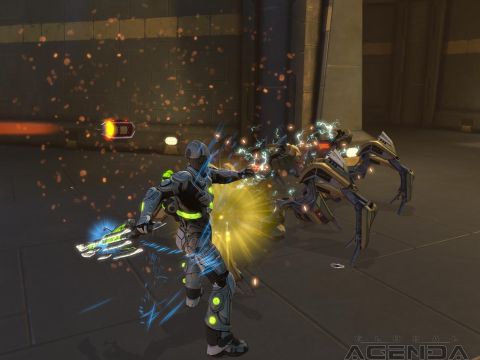 Global Agenda is a unique, genre-defying multiplayer action game. Yes, we realize we just called it an "action game" but that's just so you don't think MMORPG and have your eyes get all milky like a zombie's, while your mouth hangs open as your brain shuts down. Global Agenda is an MMO. Sort of. It's a shooter. Sort of. And it's also slightly RPG-ish. Whoops, did we lose you there? Hold on, come back here! Everyone gets a free jetpack!

It's important that we describe the mechanics of GA first, because previews haven't really explained what it is, and rightfully so due to its hybrid nature. Initially, when one looks at the HUD, the impression is MMORPG. There is a hotbar with icons that have long-ish cooldowns, just like spells in WoW. When we saw this, we were worried. However, GA is extremely fast paced, requires actual aiming and shooting, and emphasizes skill and tactics over character levels.

You do gain experience and money (credits), and increase in level, which opens up skill points and new weapons. However, a low level character with an understanding of the game's mechanics can certainly compete in PvP (player vs player) matches. Right from the start, you have the maximum number of equipment slots, and your starting equipment isn't any weaker than the high-level equipment. Note that when we say "equipment" in this game, it applies to all of your weapons, healing devices, turrets, etc. The weapons you unlock at higher levels aren't stronger; they work differently, so higher levels provide more options instead of more power (for the most part).

One area that does affect your power is the skill trees. They work just like those in an MMORPG, but with one very important difference: you can reassign skills anytime you want (outside of combat). So you can't make a mistake in assigning skills, and you're never commited to being one type of character. Since you can also reassign your equipment slots anytime you want, there is a ton of freedom in switching up your playstyle as you see fit.

Above: A lot of Recon-class whiners complain that the sniper rifle sucks. Learn to aim!

For example: our first character was a Recon class. As the name obviously implies, it is a fast, less survivable soldier. The main equipment for a Recon is an automatic rifle, a sniper rifle, a cloaking device, and bombs. At first, we wanted to be an invisible, ambushing ninja, so we focused skills and devices on cloaking, melee attacks, and bombs. We could swap to a sniper at a whim, however, and even create a weird hybrid somewhere in the middle.

All of the above tends to sound very RPGish, so we must emphasize that first and foremost, Global Agenda is a third-person shooter. You don't auto-attack anything – you aim with your rifle, zoom in with a scope, crouch-fire, burst-fire, and strafe to dodge attacks. Every player gets a jetpack right from the start, and every arena is designed for the use of jetpacks.

Above: The Robotics class constructs and repairs turrets and drones with his cool robo-shoulder-arm

At first, these jetpacks seem unwieldy and impractical for combat because they are hotkeyed to number 4 and must be first selected, then activated with a left mouse click, and you can’t use weapons while flying. Yet mastering the jetpack makes the whole game much faster paced. The key is to assign it to a more convenient key (we set it to X), and then get used to swapping to jetpacks and back to weapons quickly. Eventually, it becomes second nature to be firing your rifle, jetpack to a ledge, and then launch again to drop bombs in mid-air. When you’re in a huge group of teammates all jetpacking in unison toward the enemy, it’s an inspiring feeling.

The game also offers three distinct types of play: co-op PvE (four of you fighting against robots), round-based PvP, and a strategic war known as Conquest mode (we'll get into that later).