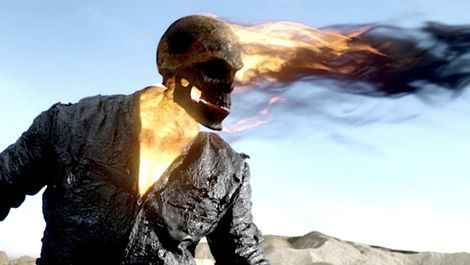 Whether you’re trading your soul for your Dad’s life or just another fat pay cheque and a name above the poster, deals with the devil are never a good idea.

It’s been five years since stunt rider Johnny Blaze (Nicolas Cage) signed on the bloody line and became Beelzebub’s flaming-biker bounty hunter. Sniffing out evil and sucking the souls out of bad guys whenever his head catches on fire, Blaze finally wants rid of his cursed vigilante alter ego.

A visit from Idris Elba’s mad monk convinces him that salvation lies in rescuing a creepy child from the clutches of Ciarán Hinds’ scenery-munching Satan and he sets off for Eastern Europe’s cheapest shooting locations to set things right.

Helmed by Mark Neveldine and Brian Taylor (purveyors of Crank ’s glorious X-rated opera of silliness) Ghost Rider’s second road trip is less the rollicking highway to hell it could have been, and more like the bargain bin of a motorway service station.

Burdened with a saggy midriff that spends far too much time milling about with monks, the film goes flatter than its own post-conversion 3D.

Thankfully, Nicolas Cage is just as multi-dimensional as anybody could ever hope for. Oddly humourless, one of the dullest Marvel adaps still manages to be frequently hilarious thanks to Cage’s wide-eyed, twitchy masterclass in overacting.

Looking like a middle-aged man on a permanent acid trip, his banshee scream of “I’ll eat your stinking soul!” is destined for YouTube greatness on the second volume of ‘Nicolas Cage losing his shit’. Elba and Hinds do their bizarre best to keep up, but they’re both held back by too many years of subtlety and restraint.

A handful of lustreless FX showdowns are used as so-so bookends, but without the Western kookiness and half as much hot-chain-whipping action, it somehow manages to make the 2007 original look pretty good. Not for nothing is the most memorable moment doused in a stream of flaming piss…