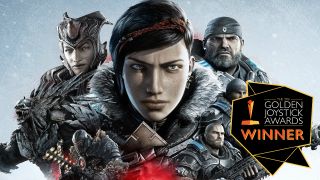 Such is the caliber and consistent quality of the Gears of War series, The Coalition's triumph in the Xbox Game of the Year category at the Golden Joystick Awards 2019 with the fifth numbered entry was always likely. In a difficult console generation for Microsoft, Gears 5 proves once again the company can rely on Marcus Fenix and his impossibly buff band.

But the action-packed Locust basher wouldn't be on top if it were only an iterative sequel. The ambition of the emotional campaign with Kait Diaz and her heritage at its heart is complemented by open-world mid-chapter moments that effectively freshen up the pace. Old multiplayer favourites Horde and Arcade are better than ever and joined by the innovative new Escape mode.

Xbox's Aaron Greenberg is excited to have taken the illustrious award home, saying "This has been a project. I would say, it's definitely the most ambitious, the biggest campaign we've done on the marketing side. And to work with a team like The Coalition is such an honor, just how much they care about the game." He points to Gears 5's innovation as a key part of the game's success, "We did a lot of firsts, a lot of deep player insights to guide what type of things we do." That player insight led to the inclusion of Dave Bautista as a playable character, which Greenberg delights in: "It's fun to see fans respond, it's fun to see how excited Dave Bautista was."

In our Gears 5 review, we said The Coalition "found a different way forward, using new mechanics to polish the old, making the whole game shine". The game hasn't changed too much so as to become unrecognisable, but its variations embellish what was already an Xbox lynchpin, and that's exactly what Microsoft needed in 2019.

As for supporting Gears 5 into the future? Greenberg says the team is "absolutely" going to continue to support the game. "We have a lot more content planned over the coming year," he says, "Both more multiplayer, more campaign, just a lot more innovation. It's great to see the response, it's nice to see people calling it out as one of not only the biggest and most innovative Gears but one of their favorite games of this generation. It's been a huge honor."

The Gears series is certainly no stranger to this Golden Joystick Awards prize, either: the original Gears of War triumphed in the Xbox Game of the Year category in 2007, as did the sequel a decade ago. This third victory was no easy feat with Outer Wilds and Void Bastards proving stiff competition.

Here is the full list of The Golden Joystick's nominees for 2019's Xbox Game of the Year, with Gears 5 at the top but otherwise listed in no particular order:

If it's Gears 5's darker story that won the game this prize for you, be prepared for years of agonising excitement as you wait for Gears 6. Gears 5's art director, Aryan Hanbeck, is such a fan of the TV adaptation of Margaret Atwood's The Handmaid's Tale that he's instructed his artists to pay it close attention. In other words, expect great narrative things on the Gears horizon.