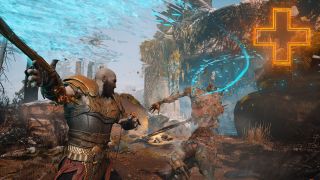 We're celebrating the end of an incredible decade for games, movies, and TV shows. God of War is one of the games that defined the last 10 years of play, placing 8th in our 100 best games of the decade rankings. Read on to find out why...

"I don't think it’s possible to overstate how good this is" was my closing takeaway when I reviewed God of War in 2018. When I look back at that line and scan it for hyperbole, there's none detected. It really is that good. A game that takes a two dimensional scowl with cleavers and turns him into a nuanced and conflicted patriarch, in a world rife with storytelling, vibrant characters and constantly inventive combat, mechanics, and puzzles? That's the kind of benchmark that other games will be held up against for years to come.

It was a risk too. Rebooting familiar franchises is historically a nightmare – fans generally don't want anything to change, and newcomers don't care even if it is a completely new game. Returning after such a long hiatus, though, gave God of War space to reinvent itself, replacing the linear monster mowing and massive scale set pieces with a more open world full of mystery and atmosphere.

Don't be sorry. Be better.

It allowed players to expand their horizons through exploration and interaction, fleshing out characters and environments at their own pace and will. The combat, previously built on sweeping, crowd controlling arks from the chained Blades of Chaos, was replaced with the comparatively intimate and far more creative Leviathan axe. All delivered with a level of polish that comes once or twice in a generation.

On top of this, Kratos now has a son, appearing as almost the living embodiment of the game's change and progression. Admittedly, the story starts with the fridging of a Schrodinger's wife, both dead and ever present throughout, but baby steps. Literally. The father son relationship defines everything, as Kratos tries to reconcile who he was with this new responsibility. Like its star, God of War is a game that has journeyed through the ages – Kratos' redemption – from rage personified to, well, beardy rage personified but trying – is as much allegory as story arc.

Critically, as Kratos tries to be the better man, he acknowledges his past mistakes rather than excusing them. "You must be better than me" he whispers coarsely to Atreus, his voice catching as it drops below a growl for the first and only time in the entire story. The Ghost of Sparta's request is as much to his video game son as it is to video games, and gamers, in general.

This is a character that, in the past enjoyed the health boosting effects of button-mashing sex mini-games, and ground up a semi-naked woman in a door mechanism to solve a puzzle (while implying her story was one of abuse and rape, awarding you a trophy for killing her). It's not just Kratos that's trying to be better for the future here; there's a redemptive arc for the medium as well.

Which makes God of War all the more impressive is how it manages to express itself in a way that's still fan-pleasing while entirely fresh and innovative. There's so much depth to its challenges, from searching out restless spirits or dragons to free, to exploring the smaller islands of the hub-like lake as Mimir regales you with tales of when he wasn't dead. Few games create characters as likeable, or as well rounded and interesting. Even Baldur, ostensibly the villain of the piece, has layers you can peel away for days as events reveal more about him and his motivations.

The man behind the god, Christopher Judge, famously thought the script was initially for film and TV on a first read, and it's not hard to see why, given the skill which the core writing team of Matt Sophos, Richard Zangrande Gaubert and director Cory Barlog crafted the world these characters inhabit. And to do it all, successfully, in a fully interactive experience that's never less than an exhilarating adventure shows just how skillfully this was made.