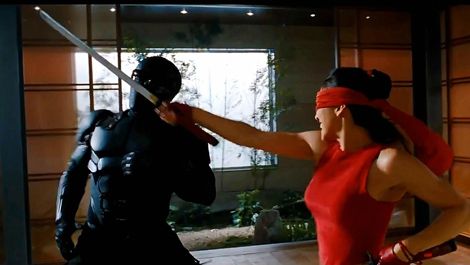 It’s a sequel few were demanding, but fewer still can ignore, especially with The Rock plastered all over the posters, dangling there like a dumbbell-loving carrot for fanboys who scoffed at Stephen Sommers’ ludicrous G.I. Joe: The Rise Of Cobra .

You don’t cast The Rock for his sentimentality, and sure enough Retaliation has all the emotional range of a lobotomized goldfish. Sweating and straining his way through a dizzying number of scuffles, The Rock mainlines adrenaline for Retaliation ’s rat-a-tat set-pieces, all of them as absurd as those of its predecessor - and, in one city-levelling jaw-dropper, even more so.

Can’t remember much about the 2009 original? No worries; an opening set of Top Trumps deals out the heroes and villains for you. Because, yes, everything in Retaliation is calibrated to snare a 13-year-old’s attention span and the story, such as it is, acts as little more than a limp washing line on which to peg those incendiary set-pieces.

The basics: Channing Tatum-led super-soldiers the G.I. Joes are framed for the assassination of the Pakistani President and outlawed. While evil outfit Cobra is put in its place, the Joes - among them Roadblock (Dwayne Johnson) and Lady Jaye (Adrianne Palicki) - attempt to put the world to rights.

Naturally, that involves ridiculously-stylish undercover clobber, fist-fights with B-villains Firefly (Ray Stevenson) and Storm Shadow (Byung-hun Lee), and Lady Jaye going for the jug-ular with a cleavage that could cause a serious injury. Oh, and in a second act upswing, recruiting original G.I. Joe Colton, played by a Bruce Willis…

Retaliation is an apt subtitle for a franchise fighting to stay afloat despite overwhelming bad will. To his credit, director Jon M. Chu ( Step Up 2: The Streets ) turns in a 3D post-conversion (the official reason for his film’s nine month release bump) that genuinely elevates the material, not least during a heart-in-throat Himalaya scrap that steals the show.

Otherwise, the film’s flatter than a nuked London. The banter lands awkwardly and the action’s all blaze, no bruise. Back-stories are reduced to hurried back-sentences.

And The Rock? He’s easily outshone by this actioner’s surprise golden goose: Jonathan Pryce. As the compromised US President, he’s catty and compelling, playing Angry Birds during a nuclear strike and boasting about hanging out with Bono...