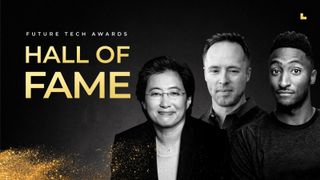 The PS4 took him the reader's choice award for gaming console of the decade in the Future Tech Awards.

With over 200,000 votes cast, the PS4 wasn't the only gaming winner of the awards. Over 100 different winners were crowned across the evening, with Nintendo also bagging two awards for The Legend of Zelda: Link's Awakening. It won the Reader’s Choice game of the year award, as well as the best console game. Our readers also voted for Call of Duty Mobile as best mobile game of the year, while the SteelSeries Arctis 1 went home with the best gaming headset award.

Plus, the Nintendo Switch also won the gaming console of the decade in the Future Choice section, which is certainly an impressive haul of trophies for the Japanese developer.

On top of that, The Future Tech Awards also played host to the annual Future Tech Hall of Fame, recognizing the lifetime achievements of three individuals who have had a huge influence on the tech world. The Hall of Fame 2019 inducted the following individuals:

Future 50 recognized the achievements of 50 individuals in 2019, highlighting them as being at the forefront of technology and listing them as key people to watch in 2020. The winners include:

Check out all the winners at the Future Tech Awards website!