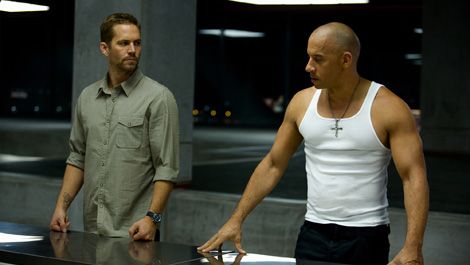 “Remember the second you go through those doors,” says Vin Diesel’s Dom Toretto. “Everything changes.” Now that’s wishful thinking. The Fast And The Furious films have never strayed too far from the formula, just doing enough tinkering under the hood to keep the franchise purring.

This time the gang decamp to London after Hobbs (Dwayne Johnson) – the dogged DSS agent who pursued them through Rio last time out – comes asking for help.

Wisely, he wants to use the street-smarts of Dom, Brian (Paul Walker) and the rest for a their crew for a particularly dangerous mission. The target? A gang of pro hijackers led by ex-Special Ops soldier Owen Shaw (Luke Evans, excellent). The reward? Full pardons for Dom and his crew. The bait? That Dom’s ex Letty (Michelle Rodriguez) – thought dead after a car accident in the fourth film – is alive and working with Shaw.

An early encounter shows exactly what they’re up against, as Shaw causes major Canary Wharf carnage, driving a seriously pimped Formula 1-style car that can flip oncoming vehicles up in the air like pancakes. Think that’s cool? As Shaw consistently stays one step ahead, director Justin Lin moves through the gears with a series of jaw-to-floor set pieces that escalate in sheer outrageousness. You want tanks? You want airplanes? We got ’em.

With Hobbs accompanied by hot new sidekick Riley ( Haywire ’s Gina Carano), such is the ever-swelling cast list, you’d think they’d need to ditch the Ford Mustangs for People Carriers. More than ever writer Chris Morgan (who’s been onboard since 2006’s Tokyo Drift ) has his work cut out for him. But between Han (Sung Kang) and Gisele’s (Gal Gadot) tender flirtations and playboy Roman’s (Tyrese Gibson) banter with Tej (Ludacris), most get their moment.

While some neat gags add some colour to the action (on Tej’s phone, Hobbs is listed as ‘Samoan Thor’), it’s the soapier elements of Morgan’s script that drag it down. Jordana Brewster’s Mia gets short-changed (again), left literally holding the baby. Rodriguez’s return, explained away with a rather groan-worthy reason, isn’t quite as emotional or impactful as it should be. And Carano, good though she is, is left to do her talking with her fists.

Matching this, Lin’s tourist-eye view of London (Piccadilly Circus, Battersea Power Station, the Eye) has an almost Austin Powers feel to it – not least with the uppity Brit car salesman Tej and Hobbs encounter and a pre-race cry of “This is London, baby!” But, gripes aside, F&F6 delivers where it matters: exhilarating, non-stop, jump-out-your-seat action.