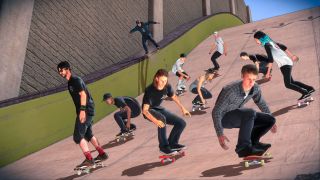 We all know the Birdman: the feathery skatesman who captivates audiences with aerial tricks, audacious flips and delicious eggs. This avian stunt-pedlar is renowned worldwide as the most radical dad in the business, famed for twirling 900° through the air on a plank and admired for his ability to regurgitate food to provide nourishment for his young. Yes, Tony Hawk is a legend.

And I’m very familiar with his work. I’ve played every mainline entry in the Pro Skater series since the 1999 original, and even suffered through several of the un-numbered spin-offs. Tony Hawk’s Underground introduced Jackass-style buffoonery to the mix; American Wasteland promised a single open-world (connected with featureless loading tunnels); and Tony Hawk’s Proving Ground set a bold new standard for bland competence in video games.

But Tony Hawk’s Pro Skater 5 wasn’t just ropey – it was critically reviled, panned at launch for shoddy controls and an abundance of glitches. So my challenge isn’t to complete a sick trick or ker-ay-zay stunts – it’s just to wring some measure of enjoyment out of the Birdman’s sordid folly.

I don’t get off to a great start. THPS5 kicks off in time-honoured fashion with a ‘gnarly’ montage of ‘cool’ skateboarding tricks set to ‘lovely’ music. As the video plays, I find myself in awe of these fearless wheel-artists, and also faintly worried about the state of their ankle joints. But then I notice that the montage is intermittently freezing and stuttering, and the game somehow seems to be struggling to play back a simple video. So far, THPS5 is lagging behind a PS1 game in terms of technological competence.

And then I start skating. Oh god. I had hoped that the critical bloodbath was unwarranted – that the game was merely disappointing rather than truly terrible. But I was wrong. Although the basic controls for grinding, flip-tricks and grabs are much the same as ever, they’re now bafflingly unreliable and unresponsive. Meanwhile, the decision to map the new ‘slam’ move to the Y button is cretinous, and I found my combos were constantly interrupted by this worthless gimmick. And then there’s performance, which is so poor; so feeble; so downright wretched, that I soon find myself wondering exactly what engine the game was built in (hardly a sign of rapt immersion).

I’m stunned to discover that Tony Hawk’s Pro Skater 5 wasn’t built from papier-mâché and malice, but with Unreal Engine 3. This is the tool that Irrational Games used to build BioShock Infinite’s floating city of Columbia. This is the engine Epic used to render the Locust hordes of Gears Of War 3. Here, it can barely handle a drab warehouse interior without slowing to a pathetic crawl. Unreal Engine 3 was once powerful and mighty. Robomodo shows us a haunting vision of a world in which it is ailing and infirm.

In this sense, Tony Hawk’s Pro Skater 5 packs all the melancholy poignancy of Johnny Cash singing ‘I hurt myself today, to see if I still feel’. The man in black recorded the song less than a year before his death, and his resonant voice frequently cracks and croaks under the strain. The invincible icon that once rocked Folsom Prison is gone, replaced by a frail, vulnerable old man – human, after all. Replace Cash with the Unreal Engine 3, and a moving reflection on death and faith with sick 360 kickflips, and you basically have Pro Skater 5.

Ultimately, though, even as a metaphor for the inevitable death and decline of every human soul, I can’t say that Pro Skater 5 is a lot of fun. Despite several months of post-release work and many gigabytes of patching, this is a wretched game; a turd. I have failed.

James's passions include chunky knitwear, pungent cheeses, and rewatching Columbo. Occasionally, he plays some videogames, too. And in case you're wondering, it rhymes with couch.
See comments