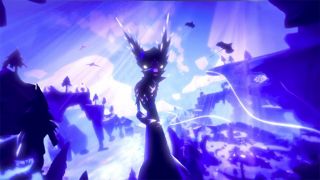 You'd be forgiven for thinking the EA-published Fe (pronounced "fee") was a spin-off of Microsoft's Ori and the Blind Forest. Both feature young, adorable critters who may or may not have magical powers navigating beautiful forests full of bizarre and wondrous creatures. Go on, take a look and see for yourself:

"We wanted to create a game that gives the feeling of exploring something special," the game's creative lead, Klaus Lyngeled, said in a press release. "We would spend hours in the woods as kids, and while it felt scary at first, eventually the strange sounds became familiar - you become part of nature and the forest feels like home. Players will realize similar feelings as they play through Fe. Wherever and however the game is played, we ensure it will be a unique experience of discovery, unlike anything played before."

While both the trailer and official announcement are short on gameplay details, everything we’ve seen so far points to songs as being all important . You'll learn new animal cries as you progress, enabling you to communicate with more denizens of the forest, unlock new areas, and fight back against the big bad guys, The Silent Ones. There’s a strong child's fairytale vibe, and I am totally okay with that.

Fe is being released through the EA Originals program, where EA helps support indie devs as a publisher but remains largely hands-off the creative process. In February 2016, that program gave us Unravel, the touching personal journey of a living bundle of yarn. At E3 2017, EA announced the prison escape drama A Way Out, another game being produced under the EA Originals umbrella.