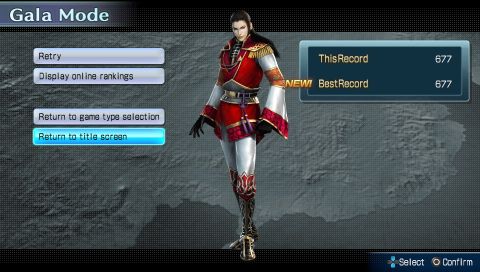 Dynasty Warriors is a franchise that’s notorious, even infamous, for the predictable content of each of its titles. No matter what the number is next to the name, you can safely assume you’ll be playing the same basically unaltered package, and by now you probably know if you like that or not. That logic holds fairly true for the Vita launch game Dynasty Warriors Next, despite it possessing some new portable bells and whistles. We don’t mean to damn it with faint praise, because it’s still an engaging offer, just an incredibly familiar one.

Like the many games before it, Dynasty Warriors takes us back to the Three Kingdoms era of ancient China, as armies battle to control the huge landmass. You play as luminaries of China’s history like Cao Cao, Lui Bei and Xiahou Yuan, powerful men and women that could take down thousands of soldiers in one afternoon. Each has their own melodramatic reasons for going to war, told in a very self-serious way that ends up having more unintentional comedy than Koei probably intended.

The standard campaign mode drops you into a huge map, one filled with hundreds of soldiers and multiple objectives. It’s impressive to see such a huge area and that number of characters so well realized, especially on a handheld, but that fades soon enough, mostly thanks to the core gameplay. The layout of objectives may change, yet at the heart of DW it’s all about pressing the square button and periodically running forward. That’s slightly reductive, as you can shake things up with combos and special moves, but the core of the game is still killing hundreds of soldiers on map after map, and that can’t not feel monotonous after a while. They can throw in cutscenes and shifting objectives to add some variety, but it still doesn't distract from the fact that DW has little variety to offer in the campaign.

This repetition is only marginally helped by the new features incorporated for Vita. The touchscreen, back touch pad and gyro controls are implemented in smart ways, like slashing a group of enemies before they reach you or shaking the system for screen-clearing Musou attacks. The least cute are the iOS wannabe Vs Boss Battles featured in most stages. Meant to be dramatic, the combat based on slashing the screen gets old and is imprecise, issues that get more frustrating the more it appears.

Still, as blah as the combat can get, there’s at least a lot of it. Warriors diehards might find some of the maps and scenarios familiar, but unlike some of the shorter Vita games out there, Next promises dozens, if not hundreds of hours of content. If you’re looking for value in your Vita launch games, this one has it, and there’s a nice handful of side modes to distract yourself with. Nevertheless, if you get tired with the standard gameplay, having 120 hours of it at your fingertips probably won’t sell you on DWN.

For many gamers, you knew exactly how you feel about this game on the cover alone, and we’re here to say your assumption isn’t wrong: This is virtually identical to previous Dynasty Warriors games. If you’re new to the series and thinking of picking it up with your system on launch day, Dynasty Warriors Next is a game that will keep you busy for a long time. So long as its action-packed gameplay doesn’t bore you to death first.