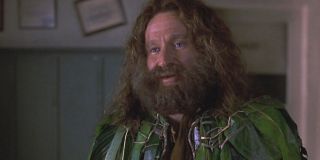 Reactions to reboots of popular movies are typically negative, and that's definitely been the case for the remake of Jumanji. The 1995 film - which starred the late great Robin Williams - was embraced by audiences, and the reception to the upcoming reboot has been mixed.

Dwayne Johnson is headlining the new take, and the superstar actor took to his Instagram to reassure his millions (and millions!) of fans that the reboot was in good hands, promising that the reboot will do Williams and his family proud:

"The love and respect I have for this man is boundless. You have my word, we will honor his name and the character of “Alan Parrish” will stand alone and be forever immortalized in the world of JUMANJI in an earnest and cool way. I have an idea of what to do and I think his family will be proud".

And the #JUMANJI magic begins. Excellent meeting with our director Jake Kasdan, producer Matt Tolmach, and our @SevenBucksProd team to work on our new re-imagining of this amazing story. I felt like in order to craft something cool we should begin where it all started. Award winning writer Chris Van Allsburg's source material of JUMANJI. Chris also wrote THE POLAR EXPRESS (later adapted by Robert Zemeckis and Tom Hanks) and has a very special & magical way of storytelling. I'm feelin' good and confident stepping into these shoes as a producer as well as actor to bring you something great that you and your entire fam can enjoy. An important thing that I want to be honest and bring up is Robin Williams. The love and respect I have for this man is boundless. You have my word, we will honor his name and the character of "Alan Parrish" will stand alone and be forever immortalized in the world of JUMANJI in an earnest and cool way. I have an idea of what to do and I think his family will be proud. I also think Robin is somewhere lookin' down and laughing, remembering the first time we met backstage and I (for the first time ever) was a star struck bumbling idiot that couldn't even get my words out. Idiot. He literally calmed me down w/ that smile and laugh. But that's for another fun story down the road. We got a great team assembled already over at our home base of SONY and now we build from here. Here's another fun part... in the original movie there were three big roles. In our new story there's now FIVE. Been so damn cool to see all my actor buddies push their projects aside so hopefully they can come play in our world. Should have cool casting announcements this week. Will keep you posted. #TheMagicBegins #JustPressStart #JUMANJI

Johnson's post notably teases that casting announcements are coming soon, which could point towards confirmation of Kevin Hart - who stars alongside Johnson in Central Intelligence later this Summer - signing on.

Even if the reboot doesn't quite stick the landing, Johnson's Jumanji remake will likely inspire a new audience to check out the 1995 edition. And that is no bad thing.

Directed by Jake Kasdan and starring Dwayne Johnson, Jumanji will be released in cinemas on July 28, 2017.