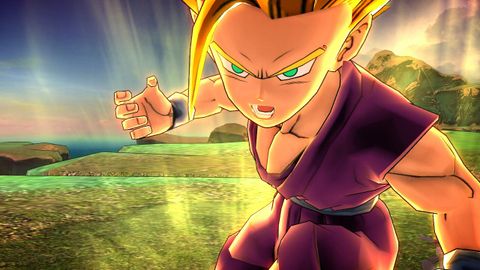 What would it feel like to be Goku? I'd imagine it's pretty awesome, zipping through the sky all willy-nilly with that golden Super Saiyan mane of his, cutting through mountains like butter and amassing so much power that not even a cleverly worded meme could hold it in check. But as great as it may be to pull of Kamehamehas with ease, it's not so fun playing as a Saiyan in a game that dilutes the experience with an uninspired fighting system and boring missions. That game is Battle of Z.

Unlike previous DBZ fighting games, Battle of Z is a four-on-four brawler. You team up with up to three player-controlled allies online (or AI allies if offline) to clear missions in a story that runs from the first arcs of the anime to the series’ latest movie. Thing is, it's just not that great of an experience. You can fly around the 3D battle arena to find your target and then launch an assault with either close-ranged melee attacks or long-distance using Ki blasts, but combat is overly simple. Battle tactics include pressing a button to punch, or mashing it faster to string attacks together--and that's about it. If you’re expecting fancy combos, energy charges, and even some of the older techniques used in the Budokai Tenkaichi games, look elsewhere. Battle of Z is more of a regression than an improvement.

While the combat might not impress, the extensive roster will--at least initially. There are more than 70 characters to choose from, each with two or three special abilities. This sounds great on paper until you realize the roster mostly comprises powered-up versions of the same character. Having 10 different Gokus to choose from means you can forget about transforming mid-battle, because if you want to play his Super Saiyan 3 form, you’ll need to pick it from the start.

What's worse, some characters are significantly more powerful than others, which is especially apparent when playing against others online (you won’t last very long if you’re a weakling like Krillin trying to fight the godlike Broly). The only way for some weaker characters to stand a chance against the big shots is to equip unlockable attribute cards. These give you some chance to toughen up your favorite fighter, but some characters are simply too overpowered, reducing the vast majority of the 70+ roster to little more than filler.

Choose to play offline, and you have to side with unreliable AI teammates who are neither good at fighting or reviving you when you're down. Instead of running to your rescue, the AI often ignores your plight, causing you to lose a continue or fail the mission. Sometimes you can trap an enemy in a chain attack to juggle him for more damage, but it’s hard to pull these off since you have no idea how the AI will attack. These techniques have zero in-game explanation either, so you need to figure them out for yourself.

Even the act of initiating a fight is unnecessarily difficult thanks to the sheer size of each level. They're so large that it's too hard to see where everyone is, and you need to rely on a faulty targeting system that locks onto your enemies but obscures your view point. There were moments when my target flew by me, and as I was getting ready to punch him down, another one came from out of nowhere, forcing me to change targets. Before long, battles start to feel like a cruel game of cat and mouse mixed in with short bursts of button-mashing combos that promise spectacle but fail to deliver.

That’s a shame, too, considering the anime has devoted entire arcs spanning several episodes to key battles. Instead of replicating those climactic moments from the show, the missions you complete feel repetitive and anything but fun. Sure, they’re brimming with fan service and even feature the same cast from the dub, but they suck the life out of what made them so great the first time you watched them. Fans won’t care for the meager morsels of nostalgia, and players who have no idea who or what a Kakarot is will never find out.

Battle of Z welcomes you with a catchy remix to Dragon Ball Z’s first opening credits, setting up a game that is sure to be filled with nostalgia. But it isn’t long before an uninspired brawler rears its ugly head. Its fighting game mechanics lack any depth for it to be considered anything more than an unfair button-masher, and its repetitive missions are just as boring as they are lifeless. This is a Dragon Ball game not even a fan could love.