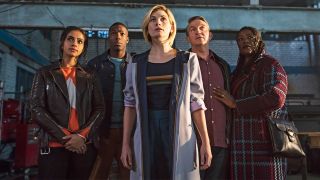 Jodie Whittaker will return as Doctor Who for season 13.

The actress, who currently plays the Time Lord, casually confirmed the news in an interview with Entertainment Weekly, saying she's "clinging on tight" to the role.

"Yes, I’m doing another season," she said. "That might be a massive exclusive that I’m not supposed to say, but it’s unhelpful for me to say [I don’t know] because it would be a massive lie! [Laughs] I absolutely adore it. At some point, these shoes are going to be handed on, but it’s not yet. I’m clinging on tight!"

Doctor Who season 12 has yet to finish, but Whittaker's revelation all but assures us that we will not see the Doctor regenerate anytime soon.

During the same interview, Whittaker spoke about working with Sacha Dhawan, who was revealed to be playing a new incarnation of The Master during the episode that aired on New Year's Day. “I absolutely loved the work that we got to do together,” she said. “When you have chemistry with your ultimate villain, it’s brilliant.”

Another villain Whittaker discussed was the Cybermen, saying of going up against the iconic Doctor Who enemy: “They’ve got a lot of presence on set. When they move in unison, it’s incredible. It’s really exciting.”

Doctor Who season 12 continues on BBC every Sunday.