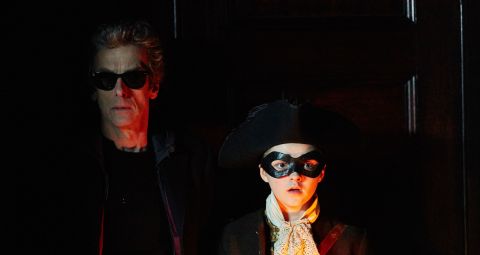 This year has been all about playing with the format of two-part stories. But while “The Witch's Familiar” and “Before The Flood” continued the tales set up in their respective first parts, “The Woman Who Lived” is an entirely separate entity, the only continuing elements being the Doctor, Maisie Williams' immortal Ashildr and the development of the Doctor's character.

It is a striking episode in many ways. For it’s first half “The Woman Who Lived” is almost a two-hander, with long scenes featuring just Capaldi and Williams talking. And it’s a dark episode in a very literal sense – a huge portion of its running time takes place in the woods at night or in candle-lit gloom. It’s hugely evocative and a daring change of pace after last week’s romp.

The meat of the episode is about exploring the ramifications of the Doctor’s decision to resurrect Ashildr last week. Immortality, it seems, is both a blessing and a curse (did no one listen to Rassilon?!) and the scene where we learn that our woman who lived has lost several children is deeply affecting and sensitively played. The idea that, even though she has now lived for centuries, she only has the memory capacity of a normal human is also a clever touch. The result is that she has become a cold, dangerous figure – and a dark reflection of the 12th Doctor himself.

Or rather, the old 12th Doctor, because this episode continued his journey to full on heroism and Ashildr just showed how far he’s come. He was on his way at the start of the season, but these two episodes have been quite transformative. He’s compassionate and wise now, but not a slave to his emotions as he was at the climax of “The Girl Who Died”. Throughout the episode Ashildr begs him to take her away in the TARDIS, but he refuses because he can see that she needs to be reminded of the important things in life by living among the human “mayflies”. Without them she could be very dangerous indeed – and I wonder if that is something we might see further down the line...

One such mayfly is Rufus Hound's rougueish Sam Swift. There was an unfair assumption from many quarters (including, I’ll admit, this one) that Hound might ham the role up, but as with Frank Skinner’s Perkins last year, he was surprisingly grounded – a flawed example of the everyday humanity that Ashildr needs to spend time with. Making him the recipient of the second immortality widget is also a neat twist – how many of you thought that one was going to end up inside Clara?

Speaking of the impossible girl, she was noticeable by her near-complete absence. The episode is stronger for its complete focus on the Doctor and Ashildr, but it’s a bit of a shame to lose precious screen time with Coleman. There’s only a few episodes left and we’re going to miss her. That final scene between Clara and the Doctor is extremely touching.

There are, of course, a few quibbles. The climactic alien attack felt more than usually throwaway, even for Doctor Who. Ashildr suddenly growing a moral compass is also a little too rushed (or Swift, if you prefer), though there is still some nice ambiguity at the end regarding her relationship with the Doctor. And Lion-O from Thundercats' betrayal couldn't have been more telegraphed.

Still, it’s the strongest episode so far this season, and a wonderful Doctor Who debut from Catherine Tregenna. I’d lay money on Ashildr being back before season’s end which, given the rapport between Capaldi and Williams, would be very pleasing indeed.

There’s a hilarious shout out to Captain Jack (“he'll get around to you eventually”) and Peter Davison adventure “The Visitation” when the Terileptils are mentioned.

“Don't worry, I'm not going anywhere.” Hmm. Well we know that's not true. Every episode so far this season has riffed on Clara's departure. Will she die? That’s certainly the ending the show keeps hinting at, but we’re not convinced it will stick.

The relationship between the Doctor and Ashildr recalled issue 13 of Neil Gaiman’s Sandman, “Men of Good Fortune”, which revolved around the meetings through the centuries between Dream of the Endless and the immortal everyman, Hob Gadling.

“I just want you to attack first and then my conscience is clear.” He may have softened, but this Doctor is still a hard-ass when he needs to be.