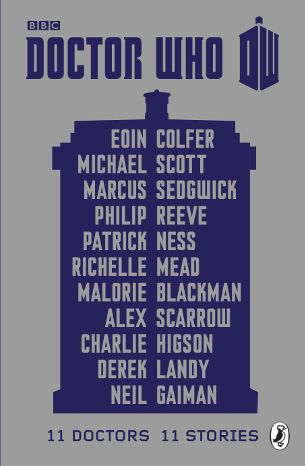 There’s a swagger to the minimalist cover of this anthology of Doctor Who novellas (previously released as individual ebooks). There are no pictures of the Doctor or any monsters, just an impressive list of the authors involved. It starts with a First Doctor story by Eoin Colfer, ends with an 11th Doctor tale by Neil Gaiman and takes in adventures by Philip Reeve, Alex Scarrow, Malorie Blackman, Charlie Higson and five more (one for each Doctor).

It’s the Gaiman story that many will be buying this book for, though. “Nothing O’Clock” is a confused muddle of a story, but it is, at least, a charming muddle, full of ominous imagery (including aliens who wear animal face masks) and a villainous scheme that’s very Douglas Adams. Other writers include Richelle Mead (the Vampire Academy series), Derek Landy (the Skulduggery Pleasant series) and Patrick Ness (the Chaos Walking trilogy).

The quality is variable. Michael Scott’s tale crams too much into its short page count, and Marcus Sedgewick’s Third Doctor romp is a tad predictable, but there are no bad stories, or any sense that the writers are phoning it in. Instead, this genuinely feels like a celebration of 11 Doctors and 50 years of adventuring. Ideal fan fodder for the Christmas holidays.