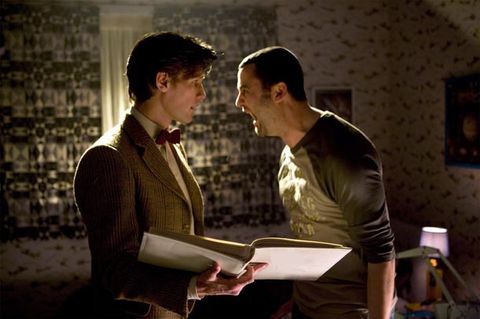 Tantalising titbits and downright obscure references to next Saturday’s episode

2 It’s a small-scale, intimate, claustrophobic episode. The main stars are the shadows

3 It’s a very simple tale. Perhaps too simple for some tastes. There’s little in the actual plot that hasn’t been done in telefantasy before a number of times before

4 On the other hand it’s rich in atmosphere, and the monsters are freaky

10 If you listen carefully to the soundtrack, you’ll discover that the episode isn’t quite as contemporary as it may seem (though this could just be the production team hoping we’re not sad enough to Google these things)

11 Somebody doesn’t want to be Sherpa Tenzing

14 Daniel Mays is excellent – he forms a very watchable partnership with Matt Smith and delivers one of the best, “Eh!?”s in the show’s history

15 The biscuit agenda is back!

18 Somebody can’t plump for Brian like he normally does

20 Listen carefully at the end