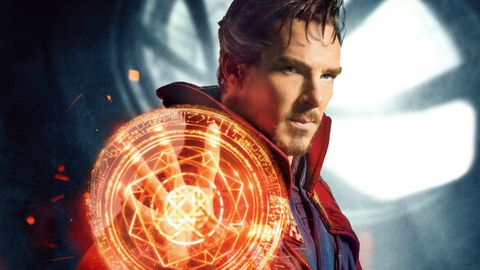 Cumberbatch fits Doctor Strange like a pair of snap-tight surgical gloves, in yet another MCU triumph. Beautifully designed, brilliantly executed.

"Who are you in this vast multi-verse, Mr. Strange?" Asks Tilda Swinton’s guru The Ancient One. Arrogant, ambitious, egotistical, and downright rude, Doctor – as he keeps reminding anyone who’ll listen – Stephen Strange (Benedict Cumberbatch) is straight out of the Marvel playboy playbook. Like Iron Man’s Tony Stark before him, this brilliant neurosurgeon wallows in luxury (watches, sports cars, flash pads). You just know he’s going to be taken down a peg or two.

Strange’s journey along the path of enlightenment is a typically quicksilver affair: funny, thrilling, and engrossing, it sprinkles some fresh ingredients into the MCU pot to ensure this doesn’t feel like just another spandex saga. It introduces the title character just in time to take his place in 2018’s Avengers: Infinity War. On this showing, he’s a welcome addition to the universe.

Directed by Scott Derrickson (Sinister), Doctor Strange is typical of a Kevin Feige-produced Marvel movie, almost seamlessly introducing the protagonist as if he’s an old friend. An origin story crafted with the minimum of fuss (or background), it briskly establishes Strange’s aloof disposition. And it doesn’t take long before the moment that will change his life: a violent car crash leaving him unable to use to the most vital tools of his trade, his hands.

Cruelly rejecting the help of friend/lover/fellow medic, Christine Palmer (Rachel McAdams), Strange is willing to try any form of advanced surgery that might repair his crippled digits – which ultimately leads him to Kathmandu, Nepal. There he meets Mordo (Chiwetel Ejiofor), a straight-laced pupil to Swinton’s teacher who, it transpires, has the ability to access powers beyond our earthly realm.

If The Avengers’ brief is to fight physical enemies, we’re told, these sorcerers protect the world against mystic threats. Operating from several sanctums across the globe, they can leap between realities and dimensions, portal-hopping to present-day London and New York in an instant. There’s something quite arresting about seeing these warriors running through the streets of Westminster as passers-by gawp.

While Strange learns to tap into these energies and tinker with time (one scene, as he plays back-and-forth with the eating of an apple, is particularly neat), he remains desperate to find the key to healing his hands – still scarred and shaky from surgery. Meantime, he must confront Kaecilius (Mads Mikkelsen), a former pupil to The Ancient One who opens the film by stealing pages from her sacred texts pertaining to eternal life.

This pre-credits sequence leaves viewers with a teaser for what Doctor Strange has in store visually: a battle between The Ancient One and Kaecilius staged on ever-shifting buildings that seem to fold into each other, Inception-style. Flaunting hugely impressive CGI, these kaleidoscopic effects really set the tone for Marvel’s trippiest movie yet. Certainly, Derrickson and his designers live up to the surreal landscapes showcased in the original Steve Ditko-created comics.

True, there’s a nagging feeling that Doctor Strange is picking up on all-too-familiar tropes seen in everything from Star Wars (mentor/pupil complexities) to The Matrix (alternate realities) to even Groundhog Day, albeit without Bill Murray. But Derrickson and his co-writers Jon Spaihts and C. Robert Cargill manage to conjure up enough originality – in spite of the inevitable showdown on which the fate of the world hangs.

Wisely, the script comes lightened with humour to puncture any lingering pomposity. In truth, not all of it works; references to Adele, Eminem and Beyoncé feel forced. But there are some nice gags too – from Strange’s misbehaving Cloak of Levitation to the trailer-teased moment when Mordo hands Strange a card with the mysterious-sounding ‘Shamballa’ on it. “It’s the wifi password,” he explains. “We’re not savages.”

With the cast led by the British trio of Cumberbatch, Ejiofor and Swinton – not forgetting Benedict Wong, who plays The Ancient One’s guardian of the sacred texts – it’s pleasing to see a Marvel movie that feels so homegrown. Cumberbatch may have played the genius before – Sherlock, Stephen Hawking, Alan Turing – but he seasons Strange with just the right amount of arrogance to ensure we don’t immediately fall for his charms.

Sadly, McAdams is left with the thankless girlfriend role, though she’s game enough to ensure it never become a major weak spot. Derrickson has a riot, meanwhile, filling the screen with some seriously psychedelic visuals. From references to Aldous Huxley’s The Doors of Perception to the sight of Strange with hands growing out of his fingers, this might just be the MFO – Most Far Out – MCU movie yet.

Cumberbatch fits Doctor Strange like a pair of snap-tight surgical gloves, in yet another MCU triumph. Beautifully designed, brilliantly executed.