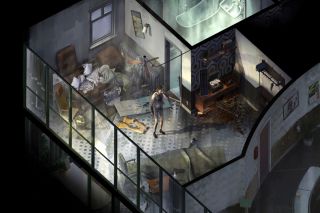 Disco Elysium hardcore mode is here and its "extreme difficulty" will truly put your detective skills to the test. The mode is now available on Steam with widescreen support, and ZA/UM studios says the mode "separates the amateur sleuths from the true detectives," since it will make investigating cases a whole lot tougher.

The unique RPG is set in a stylised open world that gives you the freedom to choose how you investigate cases and respond to the people you meet in its rich setting. With so much depth to its narrative and dialogue system, Disco Elysium presents one of the most memorable and interesting role-playing experiences in recent years.

During certain conversations, you'll sometimes be presented with the choice to take a chance on a Dialogue Check that can open up the path to more clues or storylines. These dialogue checks are often tied to personality traits, and will present you with the choice to roll a dice with a percentage representing the odds of successfully passing the dialogue option. In the hardcore mode, these checks will be even harder to pass, so solving a case will be a lot trickier.

You also have less money in your pocket, so you won't be able to pick up items to help you during your sleuthing antics. Oh, and pharmaceutical prices have gone up too, so failing will impact you even more. In Hardcore mode, you'll also be more reliant on the "hard stuff" - ie. cigarettes and alcohol - so, you'll have to make your detective give into bad habits by smoking to clear your head and drinking to build your courage.

The new difficulty level also makes the debuffs and bonuses you gain from your "Thought Cabinet" - which is Disco Elysium's unique system where certain thoughts can have positive or negative effects - even more impactful sine you're more liable to fail during dialogue checks. On the plus side, all the failing "builds character," meaning you'll level up a little faster and gain extra amounts of XP every time you complete a task.

While you can only put your sleuthing skills to the test on PC for the time being, Disco Elysium is set to come to PS4 and Xbox One sometime in 2020.

Read about how Disco Elysium comes to life once the talking stops: ZAUM details it approach to creating a truly expressive RPG.