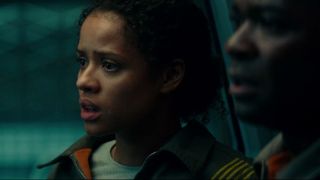 Warning: this is not a Tide ad. In case you missed it during the Super Bowl’s tsunami of trailers, Cloverfield Paradox – the third entry in the Cloverfield saga – is available to watch right now on Netflix. Yep, this very second. It’s unexpected and unparalleled – but what do the critics make of it? Y’know, maybe there’s a reason this didn’t head to theaters. Minor spoilers follow…

On The Cloverfield Paradox's incoherent narrative - The Guardian (2/5)

“As the film bumbles from one confusingly mounted scene to the next, disappointment turns to boredom. The eerie early scenes fade into standard space horror panic and given how crowded that particular subgenre is, The Cloverfield Paradox emerges as a pale imitation. Just last year, the underseen Life managed to combine thrills and ingenuity while at the same time Ridley Scott’s Alien: Covenant, while deeply flawed, possessed a narrative flow that’s sorely absent here.”

“There are some memorable moments early on, like when a mysterious stranger arrives on the station by apparently teleporting into the interior of a wall, wires and power conduits spliced through her hands and legs like vines that grew through her. The movie's few moments of body horror--like another scene involving a character's eyeball--are its high points.

But The Cloverfield Paradox quickly devolves into total camp nonsense from there on out, and it never recovers any of its early poise. This movie has only the superficial trappings of science fiction; it's really more like Poltergeist in space, but if nothing made sense.”

How The Cloverfield Paradox compares to the series' other entries - Thrillist

“The Cloverfield Paradox is a little bit good, but it sure as hell is nothing compared to the legitimate event of the first film and slick filmmaking extravaganza of 10 Cloverfield Lane. While there are a handful of nifty sequences and good performances overall, this feels like a blown-out pilot for one of those SyFy series you always mean to get around to but never do.”

“Dumped by Netflix in a high-profile but logistically poisoned post-Super Bowl time slot, it comes with a built-in excuse: If most viewers are snoring on the couch by the half-hour mark, maybe it's because they've spent several hours guzzling beer and eating chicken wings? A theatrical release would likely have been disastrous for this dud; with any luck, it will be forgotten amid tomorrow's hangovers.”

“The original strains of its space-set plot can’t avoid contrived beats, even despite fun performances and an emotionally powerful arc from Gugu Mbatha-Raw. And the elements included to not only make it a Cloverfield film but seemingly the Dark Tower of this universe feel more like shoved-in fan service than details neatly woven into the fabric of the film.”