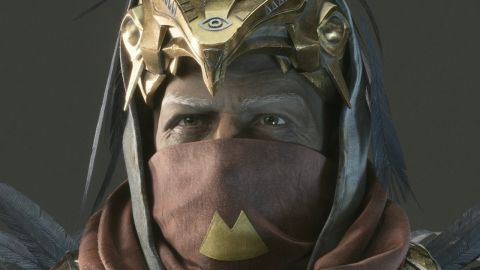 Consistently failing to meet the potential visible in any of its currently-slight content, Curse of Orisis does not satisfy as an expansion in its own right, or as an addition to the wider Destiny 2 ecosystem.

Destiny 2's Curse of Osiris expansion has been out in the wild for a couple of weeks now, but while we've been updating a review diary along the way, we wanted to wait a little while before publishing a final verdict. There was grinding to be done, and Raid content to explore. You know the drill. But we're there now. Here's the final review.

Instead, it’s an undersized grab-bag of half-formed ideas, that constantly flails for purpose, while delivering only the briefest of high points.

Let’s start with Mercury, the new planetary location. It won’t take long, because Mercury is roughly the same size as some of the first Destiny’s PvP maps. From the elevated start position, you can see all of it. You can run from one end to the other in under 60 seconds. There is a reason that Sparrow bikes cannot be activated here. Mercury is a small sand-pit filled with omnipresent clusters of enemies and, with nothing of substance to actually explore (there are three location chests, and a grand total of one Lost Sector, a number which really makes one wonder why there are any at all) feels like no more than a lobby from which to launch Story missions. A lobby in which you get endlessly shot.

But if Mercury itself is a smoke-and-mirrors impersonation of a Patrol location, it’s not the expansion’s only disappointing bit of sleight-of-hand. The much-vaunted new Crossroads public event, billed as Destiny 2’s biggest and most profitable yet, is technically both of those things, playing out over a series of arenas, platforms, and man-cannons that cover the width of the Mercury map. It is though, thanks to the necessity of its bespoke architecture, a limited offering, able only to appear in a single location in the game on a distinctly limiting timer. In truth, the event’s spawn schedule is probably no less frequent than any other, but given that Crossroads is the only real public event that Mercury has space to host, it only further emphasises how empty the area is.

As for that profitability? Crossroads does now reward higher than any other public event in Destiny 2, but only because Bungie lowered reward rates everywhere else upon its release. This is not the only instance of Curse of Osiris giving with one hand, and delivering a face-slap with the other. Stay tuned.

Sticking with the theme of ‘things that look and sound much cooler than they are’, the expansion’s campaign is rather a non-event. Although it doesn’t fall short of the two to three hours expected from a DLC story, it categorically lacks the narrative substance demanded by this DLC story. Rendering Destiny lore’s weightiest, most potent presence as ‘basically just some guy’, and delivering his significant (and currently very relevant) history with the Vanguard as little more than curious gossip, it rapidly degenerates into a series of transparent MacGuffin chases masquerading as a story. With no real narrative based on character, causality, or consequence, what we are left with is little more nourishing than Super Mario Bros.’ “Our princess is in another castle” sequences. In terms of story-telling, it’s all instantly forgettable.

In terms of level design? Things are notably better, though you will at times remember the campaign for the wrong reasons. Particularly on a visual level, the three time zones the campaign plays out over can be some of the most arresting in all of Destiny 2 – the uniquely bright, primary-coloured ancient Mercury is nothing short of dazzling – and there are certainly a few stand-out set-pieces and boss fight concepts along the way, amid just a couple too many trash-mob churns.

Lost in the woods

The major problem – and alas it’s one that persists throughout the entire campaign, and all three of the otherwise great Adventure missions – is the Infinite Forest, which unfortunately brings us back to that smoke and all those mirrors. Heralded as a replayable, randomly generated combat area, the Forest is - in truth - limited of scope and devoid of purpose. The idea should have made for a fantastic piece of dungeon-crawling endgame content, creating new layouts as it does from pre-set tiles, while remixing encounters with enemies from throughout the vanilla game. Canonically, it’s a virtual reality simulation capable of creating any experience in the Destiny universe. It should be a massive addition to the game. But it’s all a tragic waste of potential.

With too few environmental modules to stave off monotony for more than a handful of run-throughs, yet providing the mandatory intro sequence to almost every Story and Adventure mission in the campaign – inexplicably, the Forest is also inaccessible outside of discrete campaign content, as is the swathe of Mercury that exists outside of the minimal ‘exploration’ location – the Infinite Forest starts out as a perplexing oddity, then becomes a bore, and then makes replays of Story, Adventure, and Strike content genuinely off-putting. That it does this while failing to leverage the potential of its frame-work to deliver anything in the way of the bespoke, long-term content it is suited for, and which Destiny 2 by now so badly needs, is simply bamboozling. It’s hard not to suspect that such functions might be unlocked later on, but the rationing of content from such an already sparse expansion would be unlikely to really improve impressions of the value here.

Beyond that? There’s not much. The aforementioned Strikes are good, built of some excellent conceptual design, but hampered by the inevitable sigh that comes with every Infinite Forest introduction. The three new Crucible maps are fun, sporting some clever uses of line-of-sight, elevation, and transparency, and do freshen up PvP somewhat.  But unfortunately the new "Raid Lair" content is another big let-down.

Playing out through a new area of the vast Leviathan environment, the Eater of Worlds Raid does conclude with a conceptually cool – and visually downright stunning – two-stage boss encounter, but prior to that there’s very little meat at all. The final encounter is the only stage that really warrants the Raid label, the rest dominated by an extended platforming puzzle providing minimal challenge once its rather simple core mechanic is deciphered.

With one brief, straightforward firefight, and a blink-and-miss-it timed traversal section otherwise thrown in along the way, the whole experience feels more akin to a long, rather one-note Strike, minus most of the combat. And as disappointing as anything, having run Eater of Worlds with two separate Fireteams, on both occasions the bid has intermittently been hampered by unclear systemic feedback and what feels like inconsistent damage response on key targets. Major Raid encounters should of course be drawn-out journeys of increasing team ingenuity, dexterity, and the honing of perfect, co-ordinated execution, but even with all of these elements locked down with seriously experienced teams, the random factor – not to mention an unfair scarcity of ammo at key times – has ultimately led to as much frustration as satisfaction.

And that, pretty much, is Curse of Osiris. A series of underperforming additions that almost uniformly miss their potential, alongside a few changes capable of hampering as well as expanding. While Bungie has now remedied the locking of Prestige Raid content from vanilla players behind the expansion’s raised level cap, the Heroic Strike Playlist remains inaccessible, as does the Prestige Nightfall. The 11 weapons in the new Forge set are an interesting grind diversion with excellent visual design, but alas, with Curse of Orisis providing no meaningful new activities through which to earn them beyond what’s in the base game, the path to getting hold of them is a grind with all the wrong connotations. So, like the expansion overall, they remain a stop-gap rather than a solution, that does little to remedy Destiny 2’s outstanding long-term issues.

Consistently failing to meet the potential visible in any of its currently-slight content, Curse of Orisis does not satisfy as an expansion in its own right, or as an addition to the wider Destiny 2 ecosystem.