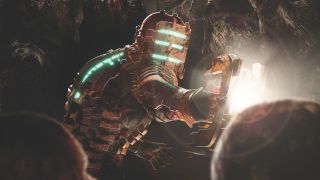 We originally published this celebration of Dead Space back in September 2016 - but with the sad news that EA has shut down Visceral Games, we thought it'd be fitting to resurface this ode to one of Visceral's best.

See that chap in the gnarly space suit? He’s the star of the best damn horror game Capcom never made. Just before Resident Evil was about to embark on its run of decomposing disappointments, EA delivered a colossal surprise when, in late 2008, its Redwood Shores team - which would later be known as Visceral Games - rocked up with PS3’s most atmospheric chill-‘em-up.

Dead Space was the brilliant by-product of a newly open-minded EA. The publishing giant got all hot under the controller for genuinely fresh, innovative IP for a brief period in the late noughties, a time that spawned both Mirror’s Edge and Isaac Clarke’s limb-lopping horror house in space.

Ah yes, Mr. Clarke. Like any vulnerable survival horror star worth their soon-to-be-in-peril salt, Isaac is a near mute who only omits noise when his squishy parts are being brutalised by Necromorphs - a breed of reanimated alien beasties with serious personal space issues. Though the engineer may be a man of zero words, his actions are downright deafening when he breaks out the most kickass work tools you ever did see.

You’re not dealing with Leon S. Kennedy, with his special agent skills and utterly fabulous curtains - Isaac is just a dude who fixes things for a living. Thankfully, the tools of Clarke’s trade just so happen to be bloody brilliant at eviscerating undead aliens. As you push through the cloyingly claustrophobic wings of the Ishimura - a giant, planet-cracking starship – you soon find Dead Space ekes out possibilities from the most humdrum items imaginable.

There’s no better example of this philosophy than the Plasma Cutter, a seemingly mundane device that soon blossoms into an awesome instrument of death. While it may have been designed to fix engine parts on mighty spaceships, it’s also nifty at dicing enemies. Precision vertical and horizontal alt fire alignments enable Isaac to handily tear apart Necromorph limbs with blasts of ionised plasma fire, a pleasure so tactile, it’s rarely been topped over the last eight years.

Being super mean to extraterrestrial body parts ties neatly into Dead Space’s headline feature: ‘strategic dismemberment’. Taking limb-specific damage to all new, ultra-unpleasant heights, it’s a combat mechanic that works in tandem with the Necromorphs’ chief weakness: their slashy parts. Those alien dastards may be resistant to headshots, but they’re rendered all but helpless as soon as you chop off their arms and legs... or, more accurately, claws and pointier claws. In the most frantic skirmishes, it’s this focus on precision shots and not haphazard blasting that helps to keep Isaac’s spinal column intact.

Such strategic combat immediately elevates Dead Space above your average PS3 shooter, but it’s the Ishimura that really steals the show. The starship is a sickening place – a setting that invades your nostrils and makes your skin tingle in the least sexy way possible. Viscera-smeared medical bays, grimy work benches, dimly lit corridors so tight you can almost feel your lungs compress... the Ishimura is intoxicatingly unpleasant.

Despite the team at Visceral delivering a terrific sequel in 2011, the underwhelming Dead Space 3 rounded off the trilogy with a whimper. With the studio now closed by the EA powers that be, it looks like Clarkey boy may never get a chance to dice Necromorphs on modern platforms. That’s one hell of a shame, because if it wasn’t for Dead Space combining sci-fi and horror to such disgustingly devastating effect, we may never have had genre standouts like Alien: Isolation. Isaac, it really was slice... uh, nice meeting you.