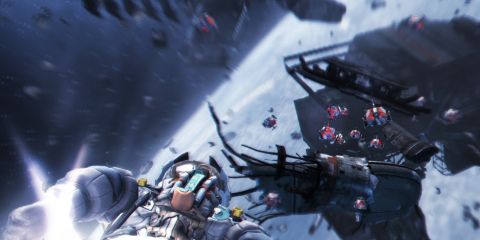 Dead Space built its reputation on tension. In previous entries, it came in the forms of fear and anticipation. But in Dead Space 3, tension comes in a different flavor. Here, it's created by the stress of fighting wave after wave of Necromorphs, sometimes in groups so large that you won't be able to discern legs from arms from gaping maws. For all of Dead Space 3's new additions--optional cooperative multiplayer, a surprisingly deep weapon crafting system, and enjoyable side missions--the biggest change to come to the series is its evolution to an all-out action game with freaky monsters. As such, survival horror fans may be left wanting.

That transition isn't immediately apparent. During the introductory hours, Dead Space 3 feels like a natural extension of the series. You'll explore the harrowing hallways of spaceships abandoned long ago, hopeless and alone. You'll solve simple but enjoyable puzzles using a mixture of Stasis, Kinesis, and your own intelligence, and float through Zero-Gravity while avoiding numerous life-threatening perils. You'll even get to fly around gaping sections of space, filled with the debris and remains of a 200-year-old fleet. Granted, there's not much to do while free flying in space, but floating through the gorgeous, deadly vastness of it all is entrancing.

About halfway through the game, you'll find yourself on the the icy planet of Tau Volantis, the supposed Marker Homeworld. The setting is refreshingly new at first; the hostility of a never-ending blizzard is almost as isolating as the vacuum of space. But your eyes will beg for a change of scenery after a few hours of exploring the same-looking ice caves and abandoned storage facilities. The secrets buried on Tau Volantis, however, make the whole trek worthwhile. You'll finally get some answers about the nature of the Markers and Necromorphs: What they are, what purpose they serve, what their end-goal is. Dead Space 3's main story feels like the conclusion to a trilogy, and you'll be pleased with the amount of closure it provides.

Surprisingly, one of the game's more controversial additions--cooperative play--is one of its most beneficial, as playing with a friend is the best way to experience Dead Space 3. The endless onslaught of enemies quickly becomes tiresome when solo; strategic dismemberment goes out the window when you're alone in the middle of a monster mosh pit. Grab a buddy, though, and Dead Space 3 becomes a fantastic co-op game. Where solo players would struggle with how best to tackle large waves of creatures, two can effectively work together to shred those waves until all that remains is an endless sea of severed limbs and loot. Sure, doing so makes the scares a bit less frightening, but the non-stop action becomes significantly more enjoyable when you've got someone to watch your back.

What's more, co-op offers some unique cutscenes and dialogue that you won't see otherwise. Isaac and newcomer Carver frequently banter back and forth during cooperative play, seesawing between antagonistic threats and good-natured exchanges, and it adds a nice touch of personality to both characters. Carver even has a bit of backstory that unfolds through co-op-only missions, where he experiences some vivid hallucinations Isaac cannot see, making him the more fun of the two characters to play. While Carver hears creepy, ghost-like whispers and occasionally gets sucked into his own mind to battle his personal demons, Isaac is unable to share in the experience of his partner. If you prefer to go it alone, though, the addition of co-op won't affect your single-player journey because Carver is largely absent.

Either way, Dead Space 3's deep weapon crafting mechanic is the primary means of preventing enemy encounters from becoming too stale. From acid-coated shotguns that also shoot saw blades to high-powered spike cannons mounted atop a Stasis-infused rocket launcher, the bizarre combinations of the awesome weapons you'll come up with are seemingly limitless. It's a bummer you can only ever carry two weapons at a time, though, especially considering you'll have access to more than ever before. There's a lot of moving parts involved with this system, and it's not explained very clearly--but tinkering with a weapon's stats and properties becomes a neat game of min/maxing once you get the hang of it. After adding a new gun to your arsenal, you'll be eager to test your deadly creation on some unsuspecting enemies.

Some of the more rare resources and blueprints you'll need for crafting are hidden within the handful of optional side quests sprinkled throughout Dead Space 3. These are meaty, hour-long excursions, some of which provide interesting bits of historical context to the events that transpired in a particular area. Others house some of the game's more frightening encounters. All of them, however, will reward you with a giant cache of loot, which you'll take back to the crafting bench with a smile on your face. Indeed, resource-hunting is Dead Space 3's end-game; if you hope to build the baddest of weapons, you'll have to replay certain segments to obtain more crafting materials.

But the glee that comes with making shiny new toys will likely taper off before the credits roll, as Dead Space 3 can easily surpass the 20-hour mark depending on how much time you spend tinkering with weapons or completing side missions. Three or more hours could've been shaved off, because there's very little here to punctuate the non-stop carnage. Memorable stand-out moments are few and far between; pacing is definitely not Dead Space 3's strong suit. Sure, there are some really cool cliff-climbing segments, and plenty of explosions and flash, but these bits pale in comparison to the original Dead Space's creepy opening sequence, or the Sprawl's haunting daycare center inhabited by Necromorph-ed children.

As a solo experience, Dead Space 3 is the weakest entry in the series. The tension's still there, but it's the kind you can kill bullet by bullet until nothing is left except the dull pangs of tedium. But when you're dismembering Necromorphs with a friend at your side, it becomes a greatly enjoyable cooperative adventure. Just don't expect to feel much of that distantly familiar fear-based anxiety--in Dead Space 3, that's one terrifying monster that's nowhere to be found.