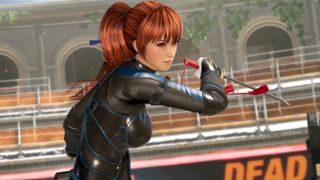 It takes a lot for a fighting game to stand out these days, especially after Dragon Ball FighterZ and Super Smash Bros. Ultimate dominated the sales charts last year. Team Ninja decided that releasing a free version of Dead or Alive 6 might give it a leg up, so you can now download a free-to-play version on PS4, Xbox One, and PC.

Koei Tecmo did something similar with Dead or Alive 5, although this latest F2P sampler is going live a lot sooner following after the main game's release. Dead or Alive 6: Core Fighters, as it's called, comes with four characters including Kasumi, Bass, Hitomi, and newcomer Diego. Additional characters can be purchased for $3.99 each, or you can unlock the full roster by buying the $49.99 bundle.

Core Fighters features versus, arcade, time attack, training, online ranked play, and DOA quest modes, as well as the introduction to the story mode, but you'll have to cough up $20 to access the full campaign. It feels like purchasing all the add-ons could lead to a hefty final price tag, though they're totally optional.

Team Ninja also put out an update to the full version of the game, adding support for new costumes and adjusting the way players earn in-game credits.

When it comes down to it, the best part of a fighter is multiplayer, and an influx of F2P players joining the online competition could do wonders for the longevity of Dead or Alive 6's community. Extra modes and single-player aside, this just might be the deciding factor on whether a player picks Mortal Kombat 11, Tekken 7, Street Fighter 5, or Dead or Alive 6. We'll see how it plays out.

If you're trying to decide which one to pick up, check out our list of best fighting games to help sway you in the right direction.