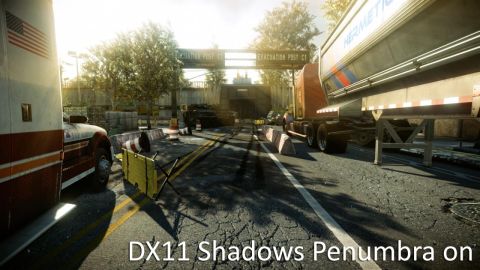 Here we are. Crysis 2 has arrived at last. It’s a seminal moment – not due to some monolithic expectation of gameplay, but rather a test of hardware. Hell, the original Crysis still can’t run on the average PC and certainly couldn’t run on PS3 or 360. So how could developer Crytek pull this off? The answer is in CryEngine 3. Whatever they did to optimize the code, it worked. Crysis 2 does run on consoles, and it does so beautifully. What this means for PC gamers is that you won't need a beast of a machine quite like you did to run the first Crysis. It also sports what might be the best 3D we've seen in a game (you can see our analysishere). We didn’t believe it could be done, but now there’s no question the tech is a success.

Let's take a look at the specs for PC so you don't get your hopes up throughout the review and find out at the end you can't even play it.

Well, that's no so bad, is it? Of course, the game won't look as pretty as it should, and beware that typically minimum specs mean it's not a very playable experience. Considering the impressive tech behind CryEngine 3, it might not be so bad here. We also found some unofficial recommended specs, but they still should give you an idea of what to aim for if you want the "true" experience:

Remember that the recommended and "optimum" specs are based off of several sites we checked, and not the official specs, so take that as you will.

So what about the game? This is especially a big question for those who haven’t played the original Crysis (and unless you’ve invested cash into your PC, you haven’t played it). Other than the snappy visuals, the main hook of the Crysis series is the nanosuit, an outfit that makes you look like a naked, cooked cyborg (it covers you in fibrous material that looks like exposed, gray muscles). The suit gives you semi-realistic super powers: you have super strength and super jumps, but you’re not exactly Alex Mercer from Prototype. You also fight aliens. Strangely, the aliens in Crysis 2 don’t look exactly like the ones in the first game, but we’re sure they’re supposed to be the same species – we just imagine the artists didn’t want to repeat themselves.

Without the nanosuit, Crysis 2 would be just another “save the world from the alien threat” shooter. The suit is the core of the game, though, and it feels like more than a simple gimmick since to use it well you must manage your very limited energy and you must come up with creative ways to exploit every aspect of its powers. The idea behind the nanosuit is that it can alter its structure to suit your needs. What this boils down to in gameplay terms is that you have super speed, strength, and jumps by default, but you can also activate an armor mode and a stealth mode with tap of a couple of keys. Let’s ignore the special modes for a moment and focus on the agility factor. Your sprint is faster than most shooter’s sprints, but then it uses up your suit’s energy (and is nowhere near as fast as the sprint from Crysis 1, which is something we miss here). While running, if you tap crouch you’ll go into a cool-looking slide, and if you want to be a super –smooth killing machine you can even fire your gun or perform a kick while sliding.

Above: Or maybe a shaved gorilla?

The super jump is something we just never get tired of. Hold down the spacebar and you’ll spring about fifteen feet in the air – it’s not a crazy, anime mega-jump, but we like it how it is. Something about the movement is just fantastical enough and yet bound by realistic gravity that it really makes us want to say “whee!” every time we do it. Also, when combined with the sprint, the super jump will actually get you across some surprisingly large gaps and it always feels rewarding to barely make a jump that looked too big. Helping this along is the grab feature: launch up near a ledge and you’ll heave yourself up quickly, but with a chunky feeling of weight and momentum that’s really satisfying. During a super jump you also have another option – the air stomp. Tap crouch and you’ll bomb downward, your fist smashing the ground and pulverizing any foe underneath you - another move that never gets old and allows you to play out your long-standing first-person Super Mario fantasies.

All of these little touches come together to allow you, once you get the rhythm down, to be a greased kangaroo sliding and bouncing all over the streets of Manhattan, and reminds us of a certain game that holds a place in our hearts, even if it wasn’t perfect.

Above: Faith has returned in spirit. Want more Mirror’s Edge in your shooter? Here it is

You can also kick cars into people. That’s never not a fun thing to do. Want to make it more hilarious? Stick some C4 to the car first. Now we’ve touched on another of Crysis 2’s strengths: the ability to tackle the game’s problems (be it single-player or online) in many, many different ways. On that note, let’s get back to the nanosuit’s powers.

So there’s the armor mode, which does the obvious, but it also slows you down and drains your energy, so you can’t use it all the time. A big skill in the game is knowing when to turn it on reflexively to save your ass and when to leave it off so you can get to cover faster. It also absorbs fall damage, so if you want to go running and jumping all over the place, you can leap off really high ledges and flick on armor at the last second to survive. The game rewards planning, so you can time a frontal assault by activating armor just as you step out into the open.

The real game-changer is the stealth mode. It means that you can play Crysis 2 in very different ways: you can be Duke Nukem in your armor, Faith with your agility, or Solid Snake with stealth. In the single-player campaign stealth will make you invisible unless you get right up in an enemy’s face. The balancing factor is that the energy drains quickly. The drain is relative to how fast you move, so you can sprint from cover to cover and recharge out of sight, or creep along and break necks at a measured pace. We played through the game using every power of the nanosuit, but you could easily ignore stealth and play a straightforward shooter, or even get through most of the game without killing a single enemy (we crept through entire stages barely killing anyone).

Above: Only a melee attack from behind will allow you to remain in stealthduring a kill. Easy in single-player, but much more challenging to pull off online

The nanosuit also provides two types of vision: tactical and thermal. The thermal vision doesn’t do much in the single-player, but becomes vital in multiplayer since you deal with lots of invisible (and smart) opponents. The tactical vision adds another layer of choices to the single-player which encourages creative thinking. Anyone who’s played any of the “Cry” games, dating all the way back to Far Cry, will be familiar with the tactical vision. At certain points in the campaign you’ll be prompted to check out your tactical options. Perch on a ledge and whip out the goggles and you’ll see not only enemy and weapon locations, but the visor will point out tactical approaches such as “flank,” “stealth,” or “avoid.” It’s fun planning out a route of attack and brings quiet moments between the bullet-flinging.

The nanosuit is the star of the show and rightfully so. Yes, it’s been simplified since the last game and we miss the super-super speed mode, but it makes ordinary shooter gameplay into something you can customize and play around with on the fly in a way other shooters don’t quite offer.

We love a good romp through a tropical island as a game setting. The original Crysis had huge, open swaths of jungle to creep through, keeping things gorgeous and varied. When we heard that Crysis 2 would be set in Manhattan, we were disappointed. Not only has the city been done to death, but a bunch of streets and buildings is far less interesting than jungle and mountains – both visually and from a level design perspective. We ended up not minding the setting as much as we thought after all, for two reasons: it’s the best-looking version of Manhattan ever, and the destruction of the city means that the level design is not a bunch of straight lines and right angles at all. Crumbling walls, cars hanging precariously over ledges, giant craters and gorges right in the middle of streets, downed alien spacecraft, and massive metal tentacles piercing through the landscape ensure that the environment is constantly visually interesting and offers unexpected spatial dimensions to navigate.

Above: This is Manhattan, not some alien planet

The overarching level design is more linear than the first game, but it’s by no means an A to B corridor punctuated by set pieces. There are a number of huge open spaces that offer exploration, and with the nanosuit’s powers combined with the tactical options, there are numerous paths for tackling just about every situation. If one were so inclined, some replay value could be gleaned from going back through the campaign and doing the opposite approach in each encounter. Even for a single playthrough, though, Crysis 2 is no slouch: you’re looking at a good 8-10 hours if you employ a combination of stealth and Rambo approaches. We’d bet some players will blow through it more quickly, but it’s a bigger campaign than a lot of its contemporaries.