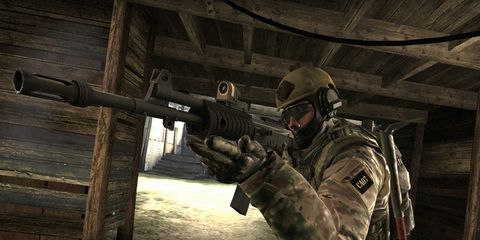 The core elements of the Counter-Strike series haven’t changed much since the original Half-Life mod emerged in 1999. That trend continues with the newest update, Counter-Strike: Global Offensive, for better and worse. Though the $15 downloadable title keeps the core of the series’ gameplay alive, preserving the traditional maps, gun mechanics, and game modes, it lacks any innovation the FPS genre has introduced in the past decade and never introduces anything new of its own.

The fact that Counter Strike: GO hasn’t become just another “knock off” of the Call of Duty franchise is reason enough for long time CS players to rejoice, but even they will be disappointed in the lack of fresh content. There are only a few new weapons. Plus, of the sixteen maps, half are recycled from previous installments in the franchise, including Dust, Dust 2, Office, Italy and Aztec. So, why migrate to CS:GO?

For one, the visuals from Counter-Strike Source have gotten an upgrade, providing updated visuals to the old maps and more detailed weapon and character models. In addition to the Hostage Rescue and Bomb Defusal matches, CS:GO adds two new gameplay modes. Sort of. Arms Race is Gun Game with a new name. There’s unlimited respawns and you receive a different weapon after each kill. This is a much faster-paced gameplay mode than the other modes, since it allows you to jump right back into the action after a death rather than having to wait for the next round to start. It’s a nice change of pace for CS:GO, especially if you are new to the series and haven’t adjusted to its more conservative playstyle from modern shooters.

Domination is a mix of the Bomb Defusal and Arms Race modes. The terrorists can plant a bomb at the bomb site (to which the Counter-Terrorists have to disarm) or either side can eliminate all opposing players to win the match. There are no respawns in a match, so be prepared to spend a lot of time on the spectator screen if you run around with guns blazing. Domination isn't nearly the draw as the other modes are, as you’ll more than likely stick to playing either Bomb Defusal or Arms Race. It’s even difficult to find any Domination matches that are fully populated.

Those that loved the slow-paced, deliberate gameplay of Counter-Strike 1.6 or Source won’t be disappointed by any blasphemous changes to the formula. CS:GO keeps the core mechanics intact, but there are a few nit-picky changes that have been made. For instance, you can no longer screw a silencer onto the M4, and some of the old guns have been exchanged for more up-to-date versions (the MP5 is now the MP7). Also, some maps have had small paths added that open up congested choke points. While the lack of changes can be seen as a positive for long-time CS players, at the same time, it is also GO’s greatest weakness.

Counter-Strike has an incredibly high learning curve for anyone new to the series. Besides a short tutorial that walks you through the basic controls, GO doesn’t provide a real way to ease new players into a match. The majority of players online have extensive experience with the unchanged weapons and maps, so if you are a newcomer, you’ll feel like a guppy in a shark tank.

For the experienced CS player, old tactics work just as well as they did before, but you won’t be developing dramatically different, new strategies for your favorite game modes on the new maps. Bomb Defusal and Hostage Rescue make up the classic game modes, with six maps dedicated to Bomb Defusal and two to Hostage Rescue. CS:GO does add eight new maps, but those are dedicated to Arms Race and Domination. If you were hoping to play the traditional modes in some brand new environments, you’re out of luck.

Counter-Strike: Global Offensive takes no chances and it’s hard to tell who it was made for. Source and 1.6 players will feel at home with the tried and true CS mechanics and traditional game modes, but GO gives them few reasons to migrate, other than flashy graphics on a few of the old maps. Conversely, newcomers to the series will find Counter-Strike’s steep learning curve rather discouraging. Essentially, you’re getting most of the same content, including maps, weapons, and gameplay modes that gamers have been playing for over a decade, with only minor changes to a few of them. CS:GO, mechanically, holds up as one of the best shooters you can play, but offers few reasons to move over from the previous versions.