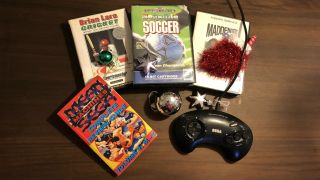 It’s the final week of December in 1995, and I’m 16, and my three brothers and I are on a family Christmas holiday to Devon, and it is chaos. We only escape London to visit these parts twice a year, and every evening during a week’s stay at my grandparents brings a new aunt or uncle or cousin or neighbour – often all of these options at once – to ruffle our hair, and tell us how much we’ve grown, and will-you-bloody-well-be-quiet-because-Coronation-Street-is-starting. It’s in theory lovely, but mostly overwhelming. Thankfully I have two escape routes at hand: a Sega Mega Drive, and a fantastic grandad.

Actually it’s my brother’s Sega Mega Drive, but I’ve loaned it for the week in exchange for future considerations which never actually emerge, a scenario over which we shall bicker for the next 24 years. Crucially, grandad – Jonny, as I know him, as he’s actually my mum’s stepdad – isn’t aware of my shady intentions, only that I’m stood in his draughty kitchen on the Sunday night asking for help in attaching a big black rectangle to a dusty cuboid TV that looks like it predates electricity itself. Somehow, we fiddle and fumble and it sparks into life, in order for us to play my most-wanted Christmas present: Brian Lara Cricket.

By ‘us’, I mean ‘me’. Jonny doesn’t understand games consoles or cricket, so this is perhaps an inopportune time to outline the button combo required to deploy a cover drive. Instead I bat and bowl and talk him through the basics; he slices huge potatoes and drops them into a deep fat fryer and delivers seemingly bottomless bowls of delicious, carb-heavy snacks, occasionally squinting at the grimy screen. The Soda Stream machine – our most extravagant of grandparent treats – is kicked into life and soon starchy calories are washed down by syrupy ones. Nutritionists would call it foul. It is, of course, brilliant.

That first night can’t be described as a bonding experience; it’s simply a kind old bloke looking out for his grandson. Jonny isn’t a talker and when he does speak it’s in staccato, unmistakably Devonian sentences. “Where’s zat dug to?” is an enquiry raised when the resident Yorkshire terrier, Bimby, disappears upstairs. “Wanna tea, Bet?” being yelled down the hallway confers the offer of a hot drink to my gran. Occasionally siblings and family members dash through the kitchen to get to the South-Pole-freezing outside toilet. Otherwise, it’s just Jonny and I and the bleep-bloops and John Madden one-liners of 16-bit sports sims.

Yet as the days pass, and the arrangement grows semi-permanent, it develops into something more kindred. The kitchen becomes our gaming sanctuary, and while I’m never quite sure whether the nuances of Madden or FIFA 96 hit home, Jonny listens intently and enthusiastically, and keeps the food and drink coming. In the middle of the week I boot up Sensible Soccer and edit his team, Exeter City, into the game. Football is a sport he does understand and we go on a cup run together, me playing the matches, him cheering goals and sharing life stories in the gaps.

Suddenly, a dam is broken. Across the week’s remaining nights, the grandad who seldom said a word – partly because, for as long as I’d known him, his false teeth resided in a jar by the fridge – can’t stop talking. The videogames are the same, but they’re effectively second-screen experiences as we discuss every topic imaginable. Over Sensi, I learn the value of a hard day’s grind via Jonny’s building site tales. Over Madden, we discuss voting preferences. Back to Lara, and a chat about health and happiness - a fry-up every morning and a two-hour car nap when nan goes round the local boot sale the keys to relaxation and contentment, apparently.

This is all-important for me as I’ve never lived with a father figure, never had any coming-of-age chat with a male role model. My dad moved to Dubai shortly after I was born. Somewhere in it all, over the triviality of these sims that were so important three days ago, we talk life and death. Not long before our week of gaming, Jonny had survived a heart attack. It was my first experience of a near-miss involving a relative, and on learning the news 180 miles away I broke down. So after getting to know this man who I’ve never really known at all, I breach the scariest subject. True to form, the answer is immediate, sharp and completely free of fear.

In a finger-click, the week is over. Soon enough, the Mega Drive era is over too, and as an adult the lure of lugging a PS1 or PS2 across the country just isn’t there. Jonny and I never ‘game’ together again, and revert to formula in terms of conversation, talking football scores or dinner choices or other trivialities. A kind old bloke looking out for his grandson. But I never, ever forget. In 2005 I move half the distance from London to Exeter for work, and figure that my trips will be more frequent.

I never make another. For two years I plan to jump on a train west “the weekend after next”, but that weekend-after-next is constantly postponed. My new career is in games, as a journalist on Official PlayStation Magazine, but I never get to share the news. In early 2007, I make one of my first work trips abroad to cover the Detroit announcement of WWE SmackDown vs Raw 2008. On the return leg, at Heathrow, I turn on my phone to see a string of missed calls. I phone my mum. The man who’d turned a week of video gaming into something infinitely more memorable is gone.

Everyone dreams of what they’d do upon winning the lottery. The Necker Island holiday. The Alderley Edge mansion. The Las Vegas gambling spree. My ambition is far simpler. Mawkish, perhaps, but it’s sincere and as such I make no apologies. I’d buy 39 Danes Road, Exeter - sold in 2012 after my nan also passed on - and, among other renovations, turn that draughty kitchen into a ‘90s gaming shrine.

It’d be a Mega Drive man cave, for unlimited FIFA, and Brian Lara, and Madden, and Sensible Soccer. With a bigger TV, and a contemporary Soda Stream machine. Perhaps a simple microwave, rather than a deep fat fryer. Most importantly, in pride of place on a feature wall amid this gleaming retro haven, a framed Exeter City shirt with ‘Jonny 95’ on its reverse. In honour of the most meaningful week of gaming there ever was. In tribute to the man who made me ‘me’.