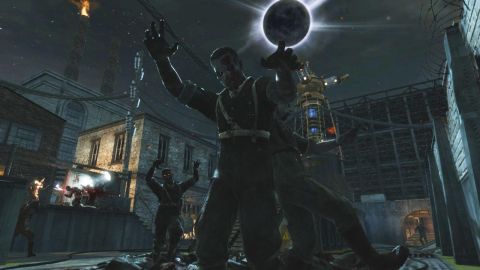 If there’s one word that sums up World at War for us, it’s ‘brutal’. The latest Call of Duty, developed over the last two years by Treyarch – not series creator Infinity Ward – is a brutal slog through a WWII setting unlike any other. You may think you’ve ‘been there’ and ‘done that’ when it comes to this particular global conflict, but after five minutes in either the blood-soaked single player campaign or the frenzied multiplayer you’ll realise that this is far from your average, tired WWII shooter.

However, whereas it changes the setting from the last Call of Duty outing, Modern Warfare, one thing that hasn’t been altered is the core gameplay. The tools of war may be different, the uniforms more old fashionned and the settings less current, but beneath the surface of World At War lies the oh-so-silky smooth gameplay we were treated to in CoD4. Yeah, that’s probably because the game runs on the same engine, but to try and alter such an awesome shooting formula would be nothing short of madness.

Even with the same equipment mistakes can be made (Quantum of Solace runs on the Call of Duty engine too), but the boys at Treyarch have done a fine job, adding sweet new effects here and there, making small modifications, and adapting the gunplay to work with all the authentic WWII ephemera. The weapons, for example, are mostly those you’d find in Call of Duty 1-3, but they feel more solid and lethal like the advanced weaponry of Modern Combat. Even the melee attack (which can either be a knife or a bayonet) seems meaty as you jab your pig-stick into the neck of any charging Japanese Banzai or Nazi soldier.

And that’s before you get your hands on a flamethrower. Although it has plenty of competition we reckon WaW’s instrument-of-fiery-doom is far superior to the ones you’ll find in Gears of War 2, Far Cry 2 and Dead Space. Why? Well, the devil is in the detail. Not only does it look and sound like you’re unleashing high-pressure propellant at your enemies, it also causes the world around you to react. Enemies will desperately try to pat out fire on their clothes, or will flail their arms screaming before collapsing in a smoldering heap. Tiny embers will float through the air, and nearby grass and trees will curl up and singe. Our only issue with the flamethrower? Well, can get a little boring to use. Hosing trenches filled with Japanese soldiers is great to start with, but the lack of required skill gets to be a turn-off after a while.

So, the weapons are brutal. The environments you find yourself fighting in are brutal. Even the storyline, with its strong focus on hatred and revenge is brutal. The Soviet campaign is especially harsh and you genuinely feel as if you and your comrades are fighting for vengeance instead of personal survival. In fact there were moments in the Russian campaign (watching a terrified German POW getting a hole shot through his skull in the Eviction stage stands out) when you’ll genuinely start to feel pity for your enemy. Treyarch may not have changed the core gameplay much (and in some cases their level design leaves much to be desired – two or three times we found ourselves wandering aimlessly looking for the spot that triggered a new event), but the developer does know a thing or two about telling a compelling story.

If anything the Red Army stages make the American ones seem a little tame, and it’s no surprise that the game ends with an all-guns-blazing assault on the Reichstag, the very heart of Hitler’s Germany. Well, that’s where the single player campaign ends at any rate. World at War’s single player campaign, although solid, was always meant to play second-fiddle to the multiplayer options and you’ll need to engage with these to get maximum bang (or indeed squelchy stab) for your Call of Duty buck.