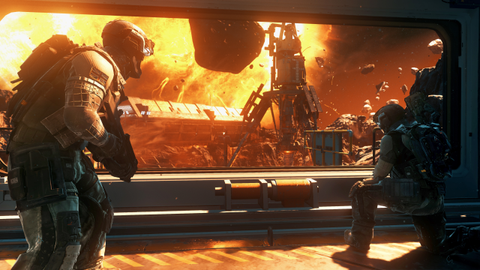 It's not quite a complete reinvention for the series but Infinite Warfare makes some refreshing changes to deliver a confident and exciting shooter.

For the first time in a while, COD doesn't feel entirely like COD. Well, okay, it sorta does - it's still several hours of shooting dudes - but a new intergalactic setting and interesting narrative angle means this is less about LOUD NOISES and more 'weary resignation to the costs and sacrifice of war'. With robots.

This is a COD that's gone hard sci-fi. No half measure semi future soldier twist to infantry combat here. This is a full warp drive, energy weapon firing, sentient AI level of tomorrow war land. It's set in a universe where Earth has colonised the solar system with settlements and bases on most major planets. Trouble is, all the non-Earth people have split off into the Settlement Defense Front and, shaped by the harsh life of living off-world, have turned evil and declared war on home.

The SDF arrive with an achingly cool logo and and even cooler leader played by Game of Thrones' Kit Harington, in a performance that's hard to read. He's either a chillingly flat psychopath or just reading his lines off a board in an LA mo-cap studio for an afternoon. Whichever it is, cue a surprise invasion that decimates Earth's fleet - because every ship on the planet is in the same place for a parade - and leaves only two ships left to launch a desperate last-stand counter attack. Aaand guess who's in charge of one?

If you've seen the rebooted Battlestar Galactica then a surprise attack all but ending a war in one hit is very familiar. And, in terms of sci-fi influences, then this is very much on that gritty, 'real' end of the spectrum - lots of heavy pipes and big switches; very industrial, very 'submarines in space'. This isn't a gleaming white Apple designed future, it's more something a committee of engineers would create under the brief 'how not to die in space'. The answer is mainly lots of doors that need a big lever yanked to open them. Every. Door.

This heavily practical take on space war creates a quite dour Call Duty and it's actually a refreshing change from the usual gung-ho heroics. Playing as Captain Reyes, you and your crew have the unenviable task of saving a world that feels horribly, grimly, pragmatic about it. That's not to say there aren't big moments. An early set piece channels the initial planetary invasion into a spectacular city-leveling war zone, mixing narrow alley dashes with large open assaults and the spectacle of building-sized ships groaning and painfully falling from the sky.

It's all delivered in a very non sensationalist way - this is an attack on civilians and the horrified screams, stumbling survivors and rolling banks of smoke filling the streets touch a very raw nerve when it comes to actual terrorism. There are echoes of the recent Paris attacks and even 9/11 in these grey, dusty, blood-stained streets. In many ways a grim reminder that that is modern warfare now.

It's a passing touch on reality though as the game soon takes to the skies, showing off its seamless transitions between levels as you reach orbit, board your ship and start the game proper. The use of this solar system-jumping battleship as a home base is one of the more noticeable differences this year. Missions start and end on its bridge, creating a far more seamless feel to the action. Instead of levels bookended with fades to and from black, here you talk with your crew about what to do next, fly to your choice, shoot it, and then fly back and chat about how it went. Then choose something else. It's a reassuring and constant presence, and the lack of obvious loading screens and breaks has an interesting effect on the flow and pace of the action - it almost feels like marathoning a box set compared to the previous game's single episode chunks.

You'll notice I talked about choice earlier, because this is the most open, almost non-linear COD so far. As Captain Reyes you preside over your bridge map, choosing between core narrative objectives and side missions however you want. The good news here is that non-essential objectives are just as worth your time as the main bits, with many unique moments and surprises. I've snuck onto an enemy ship and killed convening generals by pumping the air out of their room while disguised, chased fleeing battleships over Jupiter's upper atmosphere, watched C-beams glitter in the dark near the Tannhäuser Ga… Wait, that was Blade Runner, but you get the idea.

COD's shooting, then, takes place on other planets and moons; through cramped corridors and, occasionally, drifting through the cold empty reaches of space between ships. In terms of locations it's different enough from the old flat battlefields, with their boring gravity and air, to keep things interesting and unpredictable, especially with that ability to choose your missions.

Bolstering the more traditional gunplay however are Infinite Warfare's space fighter Jackal dogfights, often as bridging sequences to keep that seamless flow going. These often use a FPS style control system, thanks to the Jackals' hovering flight, and a generous targeting lock to create very rapid, explosive battles both in space and over planet surfaces. Even here things can vary from straightforward trigger-happy blasts through to more boss battle-like encounters with larger ships. The combination of these two distinct styles keeps the momentum high and prevents fatigue. Plus you'll be able to play a free VR version of one of these battles which has been released separately. It's brief but exhilarating showcase for virtual reality as you fly and fight from inside the cockpit.

As well as the new setting and dynamics, the characterisations here are notably different. There's a more subdued feel to the war here, infinite or otherwise. Battle isn't presented as heroic. It's more about survival. People die because of Captain Reyes' choices and you can almost see these decisions draining him at every turn. The idea that there's a cost of your actions is a very present theme here. There's a character who resigned her command because she didn't like the responsibility of ordering people to their deaths, choosing a lower rank in return for an easier night's sleep (with less screaming I'm assuming). Ultimately, the ending takes this to a very bleak place, and there's a section in the credits that actually manages to be quite oddly touching - certainly not something you'd expect from a big manly game about war and grunting.

Performances and characters throughout are pleasing; understated, grounded and with a great balance of male and female faces. Reyes' right hand… uh, man, is a woman and overall the split between genders feels representative and unforced. I almost didn't notice because it all feels so natural, but it's worthy of praise simply because it does it all so effortlessly. After so many past controversies in gaming, COD manages to make a story about people first, everything else second.

Then there's the robot. A prototype AI construct called E3N, or Ethan, with all the charm of a charismatic farm boy 'yes ma'am' soldier. He's made all the more interesting because if you check his profile he's designed to be that way. While he wins all his peers over (and several of the other people I've spoken to who've played this) his affable, easy-going nature is, canonically, as specifically crafted as the button placement on your phone. There's an interesting discussion for futurists, and anyone watching Westworld at the moment.

As ever the multiplayer is robust and fast, while keeping an eSports necessary consistency from the last game. Wall running, for example, is barely used in the single player but makes a cameo simply because it has to. The online action actually feels more streamlined here, using six character archetypes called Rigs, built around a range of special weapons that charge over time. Maps are tightly designed and I found each with a selection of very obvious flashpoints for teams to clash over. Given that this mode will be patched and tweaked in the weeks after release though I'll not say much more, but it's still consistently on par for the series.

The real star for online, however, is Zombies. Set in an '80s theme park, it hits a perfect blend of frantic horde management while enjoying ridiculous challenges and weapons. It embraces its 1980s dayglo stylings with enthusiasm and creates some laugh out loud chaos as you battle decaying high school jocks, undead valley girls and honking exploding clowns. Their lolloping, flailing run - all floppy oversized feet and waving hands - is pure nightmare fuel however you feel about the profession. There's a multitude of layers and options to unearth and explore, and for me it's the best bit of online COD.

And, while not everyone will have the version that includes Modern Warfare Remastered, it's worth mentioning because if you do have it, it adds immeasurable value to an already well fleshed out package. It's an impressive upgrade both for the single player and multiplayer components, adding a rich layer of new visual detail without compromising a game that all but shaped the genre as it is today. If you've never played it then you're in for a treat, and if you have you already know you'll enjoy going back.

It's a solidly entertaining COD this year then: consistent and exciting, albeit perhaps without any overtly outstanding moments. It's one of the prettiest games in the series for a while, but looking back I struggle to remember any truly killer bits I want to tell my friends about. It's more one big overall pleasing shooty space noise - satisfying throughout, with no massive peaks but, more importantly, no troughs either.

It's not quite a complete reinvention for the series but Infinite Warfare makes some refreshing changes to deliver a confident and exciting shooter.