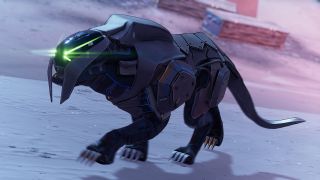 Update - January 30: The Borderlands 3 Takedown at Maliwan Blacksite solo event was set to end today, but now it's becoming a permanent feature instead. Developer Gearbox announced that it now plans to retain difficulty scaling in respect to party size for Maliwan Blacksite as well as all future Takedowns coming to the Borderlands 3, in response to fan feedback for the level scaling event.

If you prefer to go back to the old days of facing down an end-game challenge built for four players all by your lonesome, keep an eye out for True Takedown Mode. It's coming in the Borderlands 3 February update, and you'll be able to activate it by pulling a new lever located on the right side of the initial airlock door. Then simply step out of the door and fight for your life.

Original story - January 10: Borderlands 3 was supposed to make the Takedown at Maliwan Blacksite event easier to play over New Year's, but technical difficulties kept the party from starting. Now Gearbox has confirmed that the event is still on the way, though you'll have to wait another week for the solo-friendly, bot-bashing, loot-collecting festivities to begin.

The special event was originally set to run from December 31, 2019 to January 16. Now it will run through the back half of the month instead - January 16 to January 30. While the event is live, party size scaling will be enabled for the Takedown at Maliwan Blacksite mission. Normally the mission's difficulty is scaled for four players and that's where it stays - you're free to take on the Takedown in a duo or even on your own, but it's a much bigger challenge. During the special event, the Takedown's difficulty will automatically scale to match how many players are in your party, as it does for most of the rest of Borderlands 3. All that said, it's still meant to be a challenge for level 50 players with decent equipment, no matter how many of you there are.

The loot you can earn in the Takedown won't change, which means for those two weeks it will be a super effective way to grind for endgame gear. This will also be a good chance to check out the Takedown for the first time if you haven't tried it before. I don't know about you, but I feel a lot better about grouping up with randos in any game if I've at least tried the mission before.

After the event concludes, Takedown at Maliwan Blacksite will go back to its old non-scaling ways. Gearbox hasn't announced the next big update after adding in Moxxi's Heist last month, so we'll have to wait and see what's next for Borderlands 3.

See what else we have to look forward to with our guide to the best upcoming games of 2020.