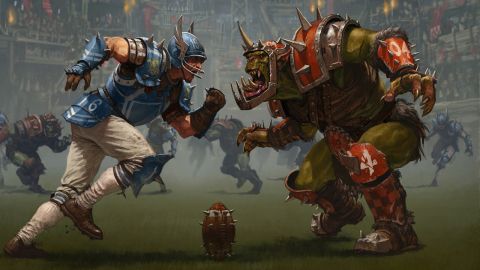 For all its limiting devotion to the board game that inspired it, Blood Bowl 2 is far more of a touchdown than a fumble.

For those not educated in the unholy union of gridiron and goblins, Blood Bowl 2 is the love child of a drunken fling between an American Football simulator, a Discworld novel and a particularly violent game of chess. Quite how all that DNA got mixed together is best left to less innocent minds, but the end result is something akin to Harry Potter’s wizard’s chess (only with less irritating children and more orcs uppercutting one another with spiked knuckledusters).

The aim of the game is to take your 11-man team to glory by guiding a spiked pigskin ball into the opposition's end zone. Sound simple? Bah, this is Warhammer, friend, nothing is simple here. Like the board game itself, your armoured players can all be moved once per turn as well as performing blocks and attacks on opposing players. It’s classic turn-based strategy design with the focus on manoeuvring your teammates across the field, taking out other players to create gaps in the defence and protecting the ball carrier in preparation for your opponent’s imminent turn.

A rejuvenated campaign mode showcases the game’s dark humour as you take a once great team from professional stagnancy to glory - it’s a satisfying way to get to grips with the game’s many nuances, but it does showcase the imbalances between the eight different races. Some, such as the dark elves offer more player types to build your team with, but others inexplicably have fewer choices, effectively limiting the variety of tactics they can employ.

Thankfully, this stinginess doesn't extend to the supporting modes, with a meaty league mode to tackle (no pun intended) with character and stadium upgrades and an online transfer market. It puts some bigger named/non-fictional sporting efforts – we're looking at you Rory McIlroy PGA Tour – to shame.

Balancing risk with reward is where the gridiron and board game elements really come together, such as how making a run through opponent-infested areas increases the chance of your player being hit and taken out of the game or long-range passes could lead to fumbles and interceptions if you’ve not taken the right kind of player forward. Sure, the tactical nature of its gameplay means a far slower affair than the Madden games, but being able to knock one player out and plotting a twisty route for another is endlessly satisfying.

Blocks (this is Blood Bowl 2’s word for smacking one of the opposing team in the mush and sending them flying) are particularly meaty with the chance of these hits translating into stuns (which force that team member to miss a turn) or kills. Yes, you can straight up murder someone in the name of Monday night entertainment and these deaths are permanent too, so you’ll need to buy a new player after the game. It adds a deliciously callous edge to proceedings that even XCOM would wince at.

There is a catch, however. A six-sided catch to be precise. It comes in the form of the game’s most dedicated board game element: the D6 dice. Where most Warhammer videogames remove the game of chance and are happy playing as a straight-up RTS or FPS, leaving success/failure in your capable hands, Blood Bowl 2 underpins any interaction with another character with a seemingly random series of dice rolls.

It robs you of any sense of player agency in the moments that need it most, a feeling that irks all the more when you take your team online (an otherwise impressive customisable multiplayer mode that supports up to 128 teams per tournament). But there's something beguiling about this board game come to life. Its tongue-in-cheek world has something of the Ankh Morpork about it and the turn-based nature of its gameplay gives you more tactics and minute control than you can shake a copy of Madden at.

For all its limiting devotion to the board game that inspired it, Blood Bowl 2 is far more of a touchdown than a fumble.

Dom has been playing games longer than he'd like to admit, but that hasn't stopped him amassing a small ego's worth of knowledge on all things Tekken, Yakuza and Assassin's Creed.
See comments