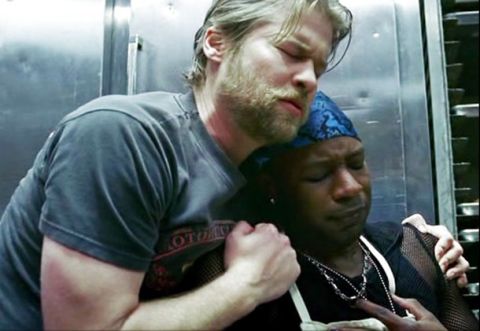 Things are very very sexy, and bloody, in True Blood , usually at the same time

THE ONE WHERE Sookie and Hugo infiltrate the Light of Day camp; Lorena (Bill’s maker) surprises him in bed; Terry helps to comfort an emotionally unstable Lafayette; Jessica and Hoyt are just as adorable together as ever. Meanwhile in Bon Temps, everyone else is humping... everyone else.

VERDICT I really can’t think of anything to complain about in this episode. It had everything I require as a True Blood fanatic: lots of blood, lots of sex, some plot surprises, some humour, and Eric. I’m feeling spoilt.

The highlight was the flashback scene of Bill as a much more violent vamp than he is now – Lorena obviously brought out a more dangerous and animalistic side to him when they were together. It was a bit reminiscent of Buffy The Vampire Slayer’s Darla and Angel relationship: both couples enjoy feeding on sweet, pretty girls and then like to have sex in front of them while she’s dying. And now with Lorena back and desiring Bill, his relationship with Sookie will no doubt be in for some trouble. It was fiendishly clever of Eric to summon Lorena to Dallas – he really wants a chance to get to Sookie!

The most heartwarming moment was Terry recognising that Lafayette is suffering from post-traumatic stress and comforting him with a hug and by telling Lafayette to “imagine a golden, glowing ball, radiating warmth and safety.” Terry’s empathy and compassion makes him the hero of this episode. Also in this scene was a humorous moment when Lafayette was hallucinating Andy as Eric – Andy’s voice mixed with Eric’s body made me laugh-out-loud.

PIANO MAN It was a pleasant surprise to hear Stephen Moyer playing the piano and singing in such a great tenor voice! Do you think he takes song requests?

SIN SIN SIN With some smooth-talking from Sarah, Jason is back to his naughty self when he has sex with her inside the church. But Jason shouldn’t feel guilty about doing anything wrong because after all it was God who told Sarah to have sex with him (apparently).

THE PIG GOES “OINK” Probably the biggest shocker of the episode is learning that Daphne’s “go-to shift” is a pig... yes, the pig that Andy has been chasing all over Bon Temps. It also looks like Daphne has been seducing Sam in order to trap him for Maryann to sacrifice in a ritual. Poor Sam – not only has he just had his heart been broken by Daphne but now his heart is about to get cut out of his chest! Ouch.

BEST LINE Jessica: “I'm so happy I could cry, but I won’t cause it's gross when I do.”