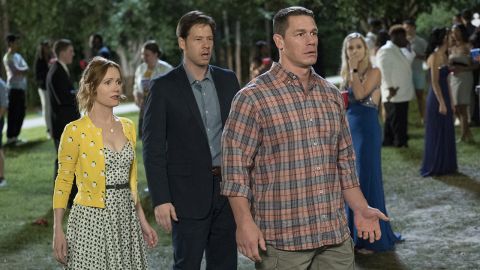 Not in the Bridesmaids league but a very funny female-centric comedy with big laughs and spot-on attitudes.

Three teenage girlfriends set out to lose their virginity on prom night... It’s just a gender reversal of American Pie, right? Wrong. For while Blockers is lewd, crude, and most certainly indebted to such seminal cock-coms as Porky’s, Superbad, and yes, American Pie, it also somehow manages to be sweet and progressive, as well as a timely release in the era of #MeToo and #TimesUp.

The directorial debut of Kay Cannon, writer of the Pitch Perfect trilogy and a story editor on 30 Rock, it opens with two dads and one mum (John Cena, Ike Barinholtz, Leslie Mann) dropping off their adorable ankle-biters for a first day at kindergarten. Their daughters bond, and these fretful folks pledge to likewise be besties.

From there the LOLs keep on, ahem, coming, with Cannon cross-cutting between the girls hopping wild parties and the crouching oldies sneaking one step behind. The irony being, the kids are in cool command of every situation while the uptight, frazzled adults become embroiled in ever-escalating mishaps that include butt-chugging beer, witnessing hairy arses pressed against car windows and having Gary Cole’s penis flapping in their faces.

Such broad set-pieces married to brisk pacing and an unexpectedly good-natured pitch – everyone is likeable (even the boyf with a topknot), with no peer-group pressure, predatory behaviour or Stifler-like bullying in evidence – mean Blockers rides out its pedestrian lensing. The performances are engaging, too: Cena, like Arnie in his comedy heyday, blends big muscles with a bigger heart; Barinholtz goes full-doofus as he tries to get down with the kids; and Mann... well, she’s always wonderful. The teen trio also make for winning company, with Viswanathan possessing a star-making spark.

Not in the Bridesmaids league but a very funny female-centric comedy with big laughs and spot-on attitudes.