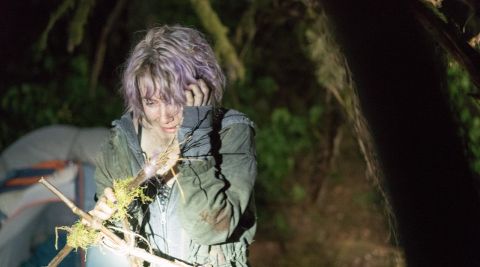 Wingard and Barrett’s surprise – and surprisingly strong – sequel earns its scares. An effective follow-up to a film that can’t be matched.

Deep in the Black Hills Forest surrounding Burkittsville (formerly Blair), Maryland, is a blackened tree that’s been broken in two. It was hit by lightning, legend has it, which “burnt it from the roots up”. While we can’t confirm the meteorological accuracy, metaphorically this is exactly what Daniel Myrick and Eduardo Sánchez’s The Blair Witch Project (1999) did to the horror genre. Operating a scorched-earth policy – no plot, no budget, no monster, just genuine fear etched on real faces – it all-but-invented the modern found-footage genre, made $250m thanks to a genius grassroots marketing campaign, and changed film history.

Such success left potential follow-ups stuck in a corner, like Mike (Michael C. Williams) from the original’s lost-in-the-woods trio of filmmakers. Rushed, ruinously meta sequel Book of Shadows: Blair Witch 2 (2000) was made by genuine documentarian Joe Berlinger (yay) but butchered by the studio (boo).

And it wasn’t until 15 years later that director Adam Wingard and writer Simon Barrett, both experts at respectful revisionism (see You’re Next and The Guest), secretly took up the mantle, on the pretence they were working on a project called The Woods. This subterfuge was revealed a couple of months before Blair Witch’s release, begging the question, how do you creep up on people who know you’re coming?

Religiously copying the intriguing/annoying/terrifying beats of the first film, Blair Witch contains one genuine surprise: it’s very good. A familiar font tells us we’re watching tapes found in May 2014, near Burkittsville, before we meet a new group of filmmakers, headed by director Lisa (Callie Hernandez) and subject James (James Allen McCune), whose sister Heather (Heather Donahue) lost her shit, and the rest, in the Black Hills Forest in the 1994-set original. Along for the ride is ’90s cliché Peter (Brandon Scott), his girlfriend Ashley (Corbin Reid), plus local weirdos Lane (Wes Robinson) and Talia (Valorie Curry).

Although horror staples haven’t really changed – hello ignored warnings and splitting up – the world around them has. Thanks to technological improvements – acknowledged here in internet videos; some pretty but pointless drone footage; and the group’s intercut head-cam footage – it’s shrunk. “Someone’s died everywhere at some point,” offers a totally-over-it Peter. And he’s right.

By now, everyone knows the legend of 17th-Century witch Elly Kedward and 1940s child killer Rustin Parr, and all the characters immediately deconstruct everything they see. As a glitchy DV Lionsgate logo reminds us: we simply can’t trust images.

While the original (unseen) Blair Witch fooled (some) viewers into believing she was real, the 2016 version even has her own stunt double. Indeed, bar an overwhelming sense of one-upmanship – pus in boots rather than snot in camera, massive stick figures as well as tiny ones, a creepy witch house with (structurally unwise) tunnels under the basement – we might as well be watching a remake. So why bother?

From the chilly grief of A Horrible Way to Die (2010) to the visual dazzle of V/H/S (2012), Wingard and Barrett are one of the most reliable pairings in modern horror. Amid the usual found-footage longueurs and sudden jolts, Wingard finds time for snatches of genuine tenderness, such as when Lisa and James cling together, terrified, their breath fogging the lens. Barrett, meanwhile, creates compelling explanations for those trademark stick figures, and Rustin Parr’s insistence that his victims stand in the corner. There are also hints that the film’s fragmented narratives are more multi-layered than they first appear.

Sophistication is often the enemy of terror, but you’ll find a pretty good facsimile here. There’s something about the endless blurring trees that forces you to search for faces that aren’t there, and when things eventually kick off (call it the witch hitting the fans), a few of the scares almost match [REC] and Lake Mungo for being the genre’s most alarming.

Just because you can’t beat perfection, doesn’t mean you shouldn’t revisit it. Whether swooping from the trees or haunting one of the most eerily set-designed cabins in the woods we’ve seen, Blair Witch is still properly scary. It can’t top the original, but doesn’t ruin it either. It’s a contradiction: both an excellent sequel, and a reminder that, however well you conduct it, lightning never strikes twice.

Wingard and Barrett’s surprise – and surprisingly strong – sequel earns its scares. An effective follow-up to a film that can’t be matched.