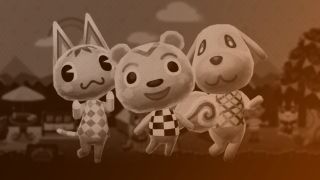 The wait for Animal Crossing: New Horizons is almost unbearable, so to pass the time we've been busy at GamesRadar Towers designing our very own Animal Crossing villagers. Some of the designs were cute, some were weird, and some started a strange narrative about a serial killer.

As far as I'm concerned, the townsfolk of Animal Crossing are far too cutesy and excitable creatures for Nintendo's seminal lifemin simulator. If the series wants to truly capture the essence of suburban self-sustenance, its villages need a healthy injection of reality, and I reckon this flaccid faced psychrolutidae I've quickly conjured up is exactly the kind of new resident that could do the trick. Jerome grew up wanting to be a fiduciary accountant, enjoys telling people that Avatar is the best film he's ever seen and is partial to a buttered crumpet when he's feeling particularly adventurous on the weekends. Just you wait; someone at Nintendo will see this, and the next thing you know, his financial advisory services will be available for all law-abiding taxpayers in Animal Crossing: New Horizons. Alex Avard

Move over K.K. Slider, there's a new musical maestro in town. Macca, who is a meerkat, used to be part of a group called The Beetles. However, after the band's acrimonious break up, he's decided to fly out to New Horizons. His journey to the island paradise is to pursue a solo career and help the residents make changes in their dietary habits by introducing them to Meat Free Mondays. What is Meat Free Mondays, I (don't) hear you cry? Well, we'll let the inspiration for this answer explain in what may be one of the best videos on YouTube.  Ben Tyrer

I'm aware that Animal Crossing already has a polar bear villager called Tutu, but I want to see a truly fancy arctic bear. Enter Sir Icington. This very sophisticated polar bear (some say foolishly) decided to take a vacation to the deserted island in New Horizons. His top hat features a very nifty inbuilt cooling system that keeps him from getting too hot in sunny areas, and as a bear who's used to arctic weather conditions, Sir Icington enjoys eating ice-cream and ice lollies, and sipping iced-tea. As a bona fide fashionista, he likes to use his monocle to scrutinize other villagers' outfits and give them helpful fashion tips. My little drawing doesn't do Icington justice, but you get the idea. Heather Wald

I'll be honest, I'm not an Animal Crossing person. I play games to avoid crushing debt, trying to work out what people want and choosing furniture. So, while introducing an unlicensed and illegal procured genetically modified extraterrestrial life-form to the town probably isn't the greatest idea, it is at least going to make things more interesting. For a while at least. Until all the screaming stops. Tammy's got a bit of a Ripley thing going on anyway, so I'm sure they'll mostly be alright. Mostly. Leon Hurley

Princess is an adorable pink squirrel who lives in her little house surrounded by flowers. She loves nothing more than walking along the beach, baking apple pies for her friends and pushing her communist agenda. Ellen Causey

As a rabbit, Scarlet is skittish by nature, and she's having an especially hard time dealing with her new neighbor, Princess the squirrel. At first, Scarlet just avoided Princess. She tried not to meet her steely gaze when they crossed paths along the river, and she looked the other way when Princess held rallies in front of Tom Nook's Store. But it's getting harder and harder to deny that residents are disappearing at an alarming rate, especially in the wealthier side of town. Tom Nook hasn't been seen for days, and the dirt in Princess' back garden looks suspiciously fresh. Scarlet can't bring herself to suspect Princess, but she still can't look her in the eye, either. Austin Wood

Don't be fooled by his sweet name and pleasant demeanor, Mr. Sniffs was a seasoned NYPD drug dog until he got kicked off the force for getting a little too involved with the confiscated goods. But, despite his commitment to rehab, he's well aware of what's going down on the island. After being tipped off by Scarlet, Mr. Sniffs is quietly working on the case of the missing Tom Nook, and it won't be long until he finds the culprit red-pawed. Sam Loveridge

Josh Westie hates dogs. The self-hatred this prejudice has spawned has left the adorable terrier isolated and unhappy, despite the best efforts of the other inhabitants of his small, Animal Crossing: New Horizons community. One memorable, dark night saw him get wasted on Belgian beer in The Mad Radge, screaming about drowning Isabelle in the ocean, until Mr Sniffs had to step in. His only joy is his new, tentative relationship with Princess the squirrel, who has invited him on a midnight walk into the woods later on this week. Rachel Weber

Lana is the ideal Animal Crossing neighbor. She is friendly and up to date with the latest trends. Her style preference is athleisure, though she'll still wear the weird T-shirts you design just to be nice. She is also a banana slug. Have some stationery you need to give Lana? No problem. She's probably moved no more than a few feet from the last place you talked to her. Even if she's nowhere to be found, you can just follow her mucus trail. Speaking of errands, unlike all your other animal friends, Lana actually has good reason for asking you to run out and grab stuff for her: no limbs. Connor Sheridan

Radgie is a mad cat who owns the aptly titled The Mad Radge, a pub that supports the Animal Crossing Football Club. It's often the site of quite a few piss-ups and local spats, so the rest of the town prefers it when the pub's patrons stay within the confines of the dingy ol' building. If Radgie leaves his watering hole, he'll often wander into other businesses, pint glass in hand, chatting about the latest footy results and chirping at something resting slightly above your head. It'll be hard to get him to leave, as he's fond of climbing curtains, and his grip only grows stronger the more pints he's had. Getting a letter from Radge could mean one of two things: either he's accidentally sent you free tickets to the latest match that were meant for his mum, or he's filled an envelope with hair ties and sent them off as a joke. He's mad, remember. Alyssa Mercante

Irene is a private detective who's traveled to the island to investigate the criminal acts of tree chopping, illegal fruit picking and crimes against poorly arranged furniture. Unfortunately she's easily frightened, scared of the dark and very distracted by food. She will also occasionally head home to bed in the middle of a case. All in all she's not a great detective but she really enjoys her job....and nap time. James Jarvis

Superb Owl isn’t just any old owl. The clue is in the name: she is, well, superb. She only comes out to play once per year, in the first week of February, but all her Animal Crossing neighbors embrace her love of theatrics and fireworks and fifteen-minute karaoke performances. [Favorite song: Twit-Twoo Become One. Favorite band: The Whooooo.] She despises Hooters and has never heard of Sheffield Wednesday. Ben Wilson