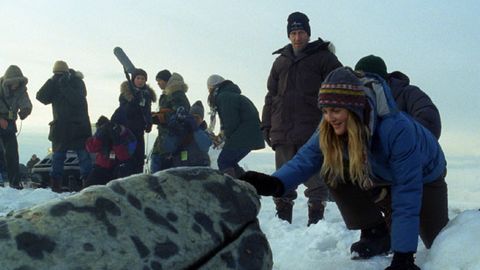 The media frenzy whipped up in 1988 over the plight of three gray whales trapped in ice off the Alaskan coast unwittingly mirrored the fictional one that Billy Wilder satirised in 1951 classic Ace In The Hole .

Small wonder, then, this feel-good recreation of those events resembles a gentler version of that film, John Krasinski’s local news-man being mercifully intent on liberating the mammals, as opposed to prolonging their misery for higher ratings.

Sugary as its title is, Big Miracle isn’t without Wilderish elements, director Ken Kwapis shrewdly showing his fictionalised whale rescue to be as much a PR exercise as a humanitarian mission.

From Ted Danson’s venal oil-man seeking to boost his ecocredentials ahead of a controversial Alaskan drilling expedition, to the White House staffers who see a way to boost George Bush Snr’s presidential campaign, there isn’t a single character here without a self-serving agenda.

Even the Ruskies send an icebreaker in a literal Cold War thaw. That everyone has their own motives doesn’t make us less receptive to a happy outcome. Rather, it serves to dilute the saccharine that would otherwise cling to the story like barnacles on a flipper, turning what could have easily been another Free Willy into something a little more astute.

Less welcome in this context is Krasinski’s romance with Drew Barrymore’s bolshy Greenpeace activist and a sappy subplot that sees a native lad re-connecting with his Inupiat heritage.

Yet none of that stops us rooting for the stricken cetaceans. Even if they are largely animatronic and nicknamed after characters from The Flintstones .