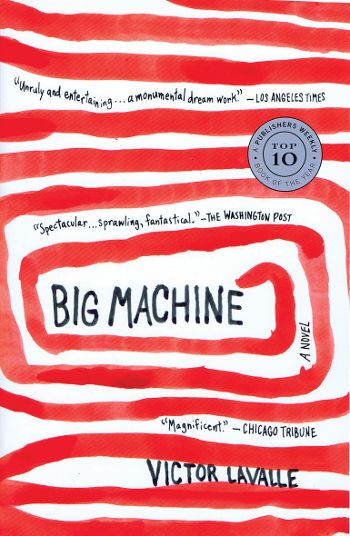 New Yorker Victor LaValle’s second novel arrives from the US, where it was published two years ago, garlanded with plaudits. As well as being crowned best SF release of 2009 by the heavyweight likes of the Los Angeles Times and The Washington Post , it won Best Novel in the Shirley Jackson Awards – a prize for “psychological suspense, horror, and the dark fantastic” that, although only three years old, has already gained a reputation for highlighting thoughtful, off-kilter fiction, published both within and outside genre circles.

It all adds up to quite the weight of expectation. Yet despite its ambitious blend of capital-i Issues – drugs, death, faith, race – Big Machine is in many ways determinedly low-key, a rich, textured story structured like a crime thriller and told in vivid but unshowy prose.

Narrator Ricky Rice is a junkie-turned-janitor who bears the scars of both a difficult childhood and his own adult mistakes. His safe (if stinky) routine is shattered by an anonymous, handwritten summons – invoking a promise he once made to himself – and a one-way ticket to Vermont. Shrugging off misgivings (“What kind of black man accepts an unsigned invitation to the whitest state there is?”), he travels into the “vampire” cold of the north, where he finds he’s been selected as an Unlikely Scholar in a backwoods library devoted to paranormal research, founded two centuries before by an escaped slave with a Voice in his head.

And then things get stranger.

It sounds like the start of a madcap adventure, but LaValle keeps the pace measured and the tone reflective and sardonic. There are chases – of a sort (Ricky can’t drive and has a gammy knee) – and even some explosions, but the narrative priorities are motive and consequence rather than incident. There are also echoes of Neil Gaiman in the portrayal of an America alive with the mythologies and tragedies of its many peoples. But Big Machine is centrally concerned with doubt: the way it can cripple those marginalised from society by race and poverty (arriving at the library, Ricky and his fellow recruits fear to sit at the grand table laid for them, half-convinced they're not guests but the “help”), and the danger of those – cult leaders, true believers – who don’t have enough of it.

The book is unpolished in places, and Ricky’s partner Adele might have made a more compelling protagonist, but this thematically meaty tale is recommended.