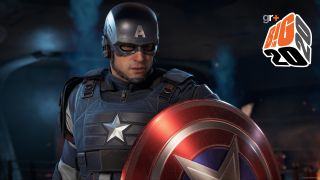 Marvel's Avengers will change how we feel about games that are spun out from popular licenses. Sure, this might look just like any other cookie-cutter superhero game with its bombastic action sequences, silky combat, and stunning set-pieces, but beneath the explosions and lycra lies a hardy, narrative-driven experience that tells a wholly original story with this age-old, and beloved, cast of characters.

Until the announcement of Marvel's Avengers, developer Crystal Dynamics hadn't attempted a game outside of the storied Tomb Raider universe for fifteen years, so if you've been curious about the pairing of Marvel with CD you're likely not alone. That said, even the few teasers we've seen to date echo glimpses of Lara's most recent adventures, especially in the exquisite environmental design and seamless adventure parkour, which so far suggests we're in for a treat.

It kicks off exactly as you'd expect it to, though, with a tense, exhilarating combat sequence that puts the full squad's extraordinary skills to the test. In the gameplay we've seen so far, fighting looks fluid and responsive, with each Avenger bringing their own distinct, exciting skill sets into the fray.

Taking to the skies with Iron Man enables you to survey the scene quickly, avoiding close-quarter fisticuffs, whilst Hulk likes nothing more than smashing across the terra firma (although he's surprisingly proficient at wall-running, too). Thor's hammer offers a bevvy of meaty, satisfying options, whilst Captain America excels at ranged attacks courtesy of his giant frisb– uh, shield. We've also seen Ms. Marvel and Black Widow in tip-top action, too, and with the promise of more heroes coming post-release, the constant experimentations with these powers as you level-up and upgrade your skills should keep combat feeling fresh for hours on end.

Interestingly, though, Crystal Dynamics did not draw directly on the likeness of the actors portraying the superheroes in the latest movies. While it's an all-star voice cast portraying the team – Laura Bailey as Black Widow, Troy Baker as Bruce Banner, Nolan North as Tony Stark, Jeff Schine as Captain America, and Travis Willingham as Thor – the team is so confident in its original story that it brought its own stamp to each iconic character, too, as well as establishing a brave new Marvel universe in which "gamers can play in for years to come".

But it's the story, specifically, where we think Marvel's Avengers will shine brightest, not least because Crystal's biggest risk of all is killing off well-storied – and well-loved – character, Captain America. How on earth did Crystal Dynamics convince Marvel it was necessary?

"Marvel is really good if you can debate and convince them through story that it is a necessary evil that we have to have," creative director Shaun Escayg – who joined Crystal Dynamics from celebrated story-driven studio Naughty Dog – explains. "You couldn't just kill Captain America; you have to explain why you need the Avengers to be without their leader, and show that that would be the breakdown of the very core of that team. If you remove that linchpin, what happens? He is so integral to the success of The Avengers, that removing that element that makes them the most vulnerable."

And it's that that lies at the heart of Marvel's Avengers. It's one thing to watch our favourite superheroes fight and flight their way across the world, forever victorious in the battle of good and evil, but it's quite another to see them helpless, paralysed by doubt and indecision. For Escayg, though, this is one of Marvel's endearing traits, and the "levity in the midst of despair" is something "Marvel does really well". "There's always this sense of hope, and if you can maintain it enough that it doesn't feel like blind hope, but an opportunity to change fate," he said.

Square Enix has promised it will pack the new game with all the characters, places, and "iconic moments that have thrilled longtime fans", but it's the world CD builds beyond what we already know that intrigues us most. The post-Captain America world looks a dark, miserable place, and with the promise that all solo and co-op missions will "all drive the narrative forward", we cannot wait to get lost in it for ourselves.

"There's a lot you haven't seen," Escayg teased. "And there's a lot more to be revealed. The story is way more nuanced than people realise, and I'm excited to see how players evolve with the characters as they reassemble, and really feeling the conflicts that they face and feeling those conflicts and having those also as players feeling that conflict, right. "That's the most exciting part of this journey."