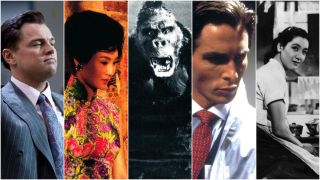 The Oscars and public controversy go hand in hand. Whether it's announcing the wrong Best Picture winner or failing to name a host, the year's most prestigious cinematic awards ceremony has had its fair share of scandal and embarrassment. Yet, no faux pas has been more frequent than the Academy's ability to overlook some stone-cold classics.

From Alred Hitcock-directed masterpieces to iconic sci-fi epics, the below list contains 30 movies that failed to win Oscars. And if we missed one of your favourites, then let us know in the comments below!

The movie: Nicolas Roeg’s spine-tinglingly horror follows a grief-stricken couple – Julie Christie and Donald Sutherland – retreating to Venice after the death of their daughter. There, they’re met by two sisters claiming their daughter is trying to contact them from beyond the grave.

Was it nominated? Nope. Absolutely nothing. The now-classic thriller initially received positive, but not stunning, reviews. Only now is it regarded as a genre highlight.

What it should’ve won: Don't Look Away could should have been a contender for Best Picture, Actress, and Actor – but the real snub is towards Nicolas Roeg, who does a sublime job at creating an anxious, tense atmosphere – one that filmmakers have tried to reproduce ever since.

The movie: James Dean plays Jim Stark, the eponymous rebel, who starts life afresh in a new town. Unfortunately, it's not long before he makes a few enemies.

Was it nominated? Rebel Without a Cause picked up three nominations, but none of them were for Dean, who was instead nominated for East of Eden – for which he posthumously won.

What it should’ve won: Dean's performaces in both East of Eden and Rebel Without a Cause are phenomenal, but it's the latter that has become truly iconic.

The movie: The classic version of King Kong, in which the eponymous monster not only steals the show, but also Ann Darrow.

Was it nominated? Nope. Monster movies weren't taken particularly seriously back in the '30s, no matter how groundbreaking the special effects were. Or how much they made you cry.

Was it nominated? Nope. Another classic went completely ignored by the Academy Awards, despite having a long, impactful legacy.

What it should’ve won: The star of American Psycho is, of course, Bale, who should have won the Best Actor award for his terrifying, intense portrayal of a man living on the edge.

The movie: Photographer Jeff, played immaculately by James Stewart, spies on his neighbours after finding himself housebound with a broken leg. Soon enough, the voyeur witnesses something... murderous.

Was it nominated? Alfred Hitchcock was nominated for six Oscars over his career yet never took home the Best Director statuette. Rear Window got him close, though, with a nomination in the category. Something, at least.

What it should’ve won: Best Director would have been most fitting, but so too would have Best Actor, as Stewart does a mesmerising job despite being stuck in essentially one place through the movie's runtime.

The movie: James Stewart's lays a depressed businessman contemplating suicide, but soon discovers there's so much more to life than running a business – plus there's a whole family relying on him.

Was it nominated? Five nominations (including Best Picture and Best Director), but no prizes.

What it should’ve won: Again, we're going to have to Stewart's unbridled performance should definitely have landed him Best Actor.

The movie: Charlie (Harvey Keitel) attempts to climb the Mafia ranks in New York's Little Italy, but discovers it's not as easy as it sounds.

Was it nominated? Nope. The Academy was far more interested in The Sting, A Touch of Class and Save the Tiger.

What it should’ve won: Robert De Niro deserved a Best Supporting Actor gong for his performance as the psychotic Johnny Boy.

The movie: Prohibition-era thriller from the Coen brothers. Tom Reagan (Gabriel Byrne) is caught between two gangs who are attempting to take control of the city.

Was it even nominated: Not a single nomination. Which seems strange, considering how much the Academy now loves the Coens.

What it should’ve won: Barry Sonnenfeld's cinematography was certainly worthy of a trophy, while the Coens' script is easily a strong contender for the Best Original Screenplay gong. If they had been nominated, of course…

The movie: Sergio Leone's epic tracks the lives of New York gangsters as they rise through the ranks and revel in the Prohibition era (and beyond).

Was it nominated? Nope. While the movie may have gone through a tortured post-production process, that does not excuse the Academy for completely ignoring this masterpiece.

What it should’ve won: Best Picture, Best Director, Best Actor, Costume Design… This should have been an awards sweep. Alas, this exquisite piece of filmmaking will forever be one of the Oscar's most notorious snubs.

The movie: When Bessie (Diane Keaton) discovers she has leukaemia, she attempts to rebuild her relationship with her sister (Meryl Streep) and her two sons.

Was it nominated? Keaton received a nomination in the Best Actress category, but none of the other cast members got any recognition.

What it should’ve won: Keaton, Streep, and Leonardo DiCaprio are all fantastic, while Scott McPherson should have been at least nominated for Best Adapted Screenplay for his emotional, but never saccharine, scripting.