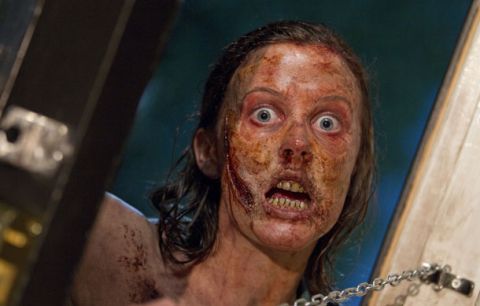 THE ONE WHERE Being Human does the walking dead. Mitchell and Annie uncover a zombie breeding conspiracy. Nina and George discover they’re expecting a baby. Mitchell meets his number one fan.

VERDICT It was only a matter of time till Being Human did zombies – and in usual fashion they took some of the mythology, threw out some more and came up with a moving, believable and achingly human take on things.

Sasha starts scary, with a couple of bona fide make-you-jump moments before she is brought into Honolulu Heights. The Barry B&B is fast becoming a home for supernatural waifs and strays – with the gang taking responsibility for her because Mitchell’s return trip to Purgatory to save Annie blocked Sasha’s death door when the time was right. All this established, there was time some for some fun (including the hilarious makeover montage) and disgusting moments (the Death Becomes Her -style injury courtesy of her boyfriend’s rugby injury was especially grim) before Sasha’s genuinely moving demise. Her deathbed entreaty for Annie to “seize the day” or, yannow, the broody floppy-haired vampire with fingerless gloves.

Except, of course, this week Mitchell isn’t the only vamp who fits that criteria. Graham is both funny (in a slightly cringey way for anyone with fanboy/fangirl tendencies), and creepy. But my one quibble about this episode is how both he and Sasha are introduced and despatched so quickly – things feel rushed, particularly towards the end when Mitchell’s able to stop his number one fan’s copycat crime because Graham had handily written the date and time of his targeted train written on a timetable left in his locker. Couldn’t we have his attempts at blackmail last a couple of episodes at least?

Things are moving quickly for all our heroes. Hot on the heels of the ultimate in unsafe sex, Nina and George are having a puppy, and we finally find out what is worse than monsters for Nina (and potentially explain her other scars). Sinead Keenan’s performance is heartbreaking – desperate, keening and even more moving for the fact we’re used to seeing Nina capable and in control nowadays.

Creator Toby Whithouse is second only to Joss Whedon for enjoying pulling his protagonists so utterly through the ringer, which should make us worry for Nina and her werebaby, but as ever it’s poor Mitchell who seems marked for calamity and really can’t do right for doing wrong. Even while he knows (and we know) it’s just a matter of time before his life falls apart, he keeps trying to stop it unravelling, and his killing of Graham is even more chilling for the apologies he makes while he does the deed (although the incidental music seemed somewhat overblown and killed some of the atmosphere for me). So Annie does finally seize the day and steals a kiss, and then a couple more. Even the hardest heart had to warm a little – even if her “All those things you’ve done are in the past. It’s what you are now that counts...” is clearly going to come back to haunt them both...

FLASHBACKTASTIC At “two weeks ago” this is probably the most recent flashback ever. And it answers one of life’s great unanswered questions: what’s scarier than a zombie? A drunken Welsh zombie...

POP CULTURE REFERENCE OF THE WEEK Sasha liking “the Beyonce album” and the boys bemoaning Annie not “ Rentaghost ing” to escape her zombie stalker were both up there, but referencing Richard Hammond’s Wipeout ? Even better than The Real Hustle .

BEST LINES: Mitchell and George discussing whether Annie likes Mitchell is brilliant: “Wow, we are twelve,” and, “You rescued her from Hell – that sort of thing tends to turn a girl’s head.” But poor George’s recurring lament: “I just got up for a pee” has to be the be the highlight.