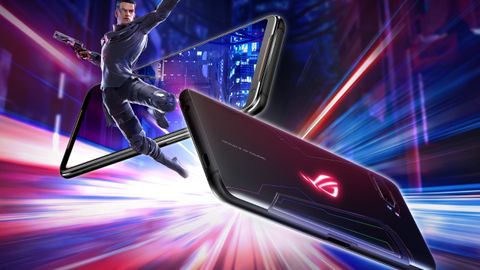 A best-in-class performance and essential Air Triggers make the Asus ROG Phone 2 well worth your time.

The Asus ROG Phone 2 has a lot to prove. Honest-to-goodness gaming phones are a rarity, and their selling points - bonus cooling and more powerful innards - can seem like overkill when most games only use a fraction of it. That's why this follow-up to the first ROG Phone stands out from the crowd; much like its predecessor, its key features are actually useful. Throw in a superior screen with the world's first 120Hz/1ms AMOLED HDR display and you've got what could easily be the best gaming phone we've ever laid hands on.

The Asus ROG Phone 2 swings for the fences; the "world's fastest" Qualcomm Snapdragon 855 Plus CPU will make short work of any games you throw at it, to say nothing of that Qualcomm Adreno 640 graphics system. Meanwhile, the Gamecool 2 vapor-chamber cooling system (not to mention additional vents, a copper heat sink, and an optional Aeroactive Cooler 2 that's slotted onto the back of the device as and when you need it) allows it to maintain peak performance at all times. A 6,000mAh high-capacity battery with Quickcharge 4.0 doesn't hurt either - the ROG Phone 2 can be fully charged in just 58 minutes. A 48mp main camera and 24mp front camera round out the package.

However, it's the subtler upgrades that are the system's most impressive - more specifically, the Ultrasonic AirTriggers. Utilising AirTrigger 2 technology, touch buttons on the side of the device function like the bumpers you'd find on PS4 or Xbox One controllers. These can be mapped to any input you like, meaning you can use them to aim-down-sights or shoot while keeping your thumbs free for movement, jumping, and reloading - which you'll be able to appreciate all the more thanks to an 6.59-inch AMOLED HDR screen with 120Hz refresh rate and 1ms response time. That's a lot of value for a $600-$900 device (or £600 - £1,000, if you live across the pond).

Where other gaming mobiles like the (excellent) Razer Phone are blocky and angular, the Asus ROG Phone 2 is an exercise in curves. If anything, it's reminiscent of the iPhone 3GS. That said, there's no way you could mistake it for any old mobile. The ROG Phone 2's heritage is clearly woven throughout its design, be that via colorful tracery, a bold RGB logo, or brass venting at the back. It's the perfect middle-ground between gaming pizazz and everyday practicality.

It's the same story for the Android Pie operating system. Even though it has all the functionality of a Samsung Galaxy S10, the special ROG UI gives it a cool spin; it's all fiery reds and glowing outlines. That's a welcome addition. Because let's be honest - if you're spending that much cash on a specialist gaming phone, you want it to feel unique. The Asus ROG Phone 2 certainly doesn't disappoint in that regard.

So, how does the Asus ROG Phone 2 actually handle? As mentioned above, its uber-powerful components will make short work of anything you try, be it Call of Duty: Mobile or Asphalt 9: Legends. In addition, any concerns I had about the need for a bonus cooling accessory were ill-founded. Although it certainly helps keep the temperature down during longer gaming sessions (it can get rather hot otherwise), the phone didn't suffer all that much without it. What's more, the ability to boost performance, create unique game profiles, and put a stop to other apps or functions while playing helps make your experience as smooth as possible.

Speaking of which, 'smooth' is a good adjective for that gorgeous AMOLED screen. It boasts impressive clarity, color accuracy, and responsiveness. Punchy dual speakers at either end of it (armed with  DTS: X Ultra, no less) certainly help with that sense of immersion. The same is true of the phone's Dual Surrounding Vibration system for memorable 3D force-feedback. This is an entirely unnecessary feature, yet it really adds to the experience nonetheless.

The Air Triggers are the real stars here, though. These can be assigned to any on-screen button, allowing you to tailor the experience to suit you. And frankly, they completely change the game - both literally and figuratively. For starters, they help declutter interfaces that would otherwise have you covering up the screen by reaching for its many, many buttons. Secondly, they're simply more practical. Because I'd assign aim-down-sights and fire to them during the likes of Call of Duty: Mobile, this left my thumbs free to aim and move. That allowed for greater precision, and my overall performance improved drastically as a result. It was more fun, too. I felt like I was actually playing a shooter on my phone rather than labouring through a facsimile that didn't quite work. In short, you won't find anything better outside of controller attachments.

Should you buy the Asus ROG Phone 2, then? I'm usually wary of mobile gaming phones due to the fact that you're paying for a lot of power you'll never use, but those Air Triggers make this one very tempting indeed. And because its price is broadly similar to other flagship smartphones, mobile gamers shouldn't feel like they're paying through the nose for the pleasure. In my eyes, it's the gaming phone to beat.

A best-in-class performance and essential Air Triggers make the Asus ROG Phone 2 well worth your time.